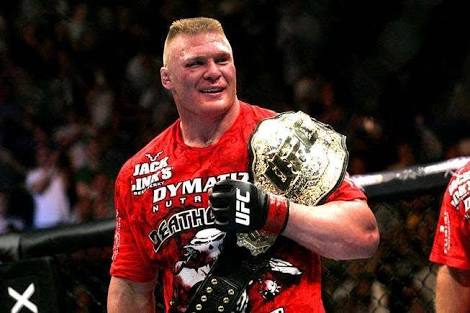 White today took to social media to post a picture of the two together, accompanied with a teasing smiley face indicating a small chance that Brock might be returning back inside the octagon.(via Twitter):

Lesnar last fought at UFC 200 held on July 9,2016 at the T-Mobile Arena in Las Vegas,Nevada.Though Lesnar said he was “closing the door on MMA” in March 2015,UFC announced on June 4, 2016 that he would return at UFC 200.WWE confirmed it had granted Lesnar “a one-off opportunity” to compete at UFC 200 before he would return to the company for SummerSlam on August 21.Lesnar faced the Former Interim Heavyweight title Challenger Mark ‘Super Samoan’ Hunt.Lesnar defeated Hunt via unanimous decision(29-27, 29-27, 29-27).Avoiding 19 of Hunt’s 30 attempted standing strikes and taking him down four times to land 43 significant ground strikes (32 in the final round). He also was paid a UFC record $2.5 million purse.

On July 15, Lesnar was notified of a potential anti-doping policy violation by the United States Anti-Doping Agency (USADA) stemming from an undisclosed banned substance in an out-of-competition sample collected on June 28.On July 19, the UFC announced that a second sample taken in-competition on July 9 tested positive for the same banned substance discovered in the previous out-of-competition sample.On August 23, the Nevada State Athletic Commission (NSAC) confirmed that Lesnar twice tested positive for the estrogen blocker Clomiphene and he was suspended.On December 15, it was confirmed that Lesnar was fined $250,000 and suspended from competition for one year by the NSAC. He would be eligible to return in July 2017. As a result of the suspension, the result of his fight with Mark Hunt was overturned to a no contest.On February 14, 2017, it was reported that Lesnar had notified UFC he was retiring from MMA for the second time.

Lesnar first retired from MMA after his bout with Former Title Challenger Alistair Overeem.He lost the fight via TKO in the first roung,then announced his retirement from MMA saying “tonight was the last time you’ll see me in the octagon”.