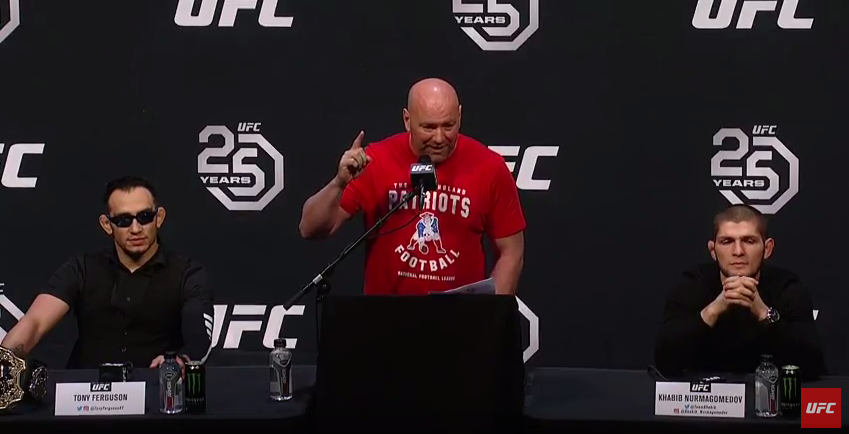 At the UFC 25th anniv press conference with the stars of UFC 222 & 223, Dana White mentioned that the lightweight division had to go on but refused to actually say the words ‘Conor has been stripped of the belt’, even on repeated questioning and instead asked the reporters ‘ next question’.

The MMA India Show’s and www.mmaindia.com’s Chamatkar Sandhu was present and very cheekily managed to ask a question from everyone present prompting Dana White to ask ‘whether he was the only reporter present’!. When Dana White wasn’t very impressed (or happy) with the next reporter’s question, he threatened to let mmaindia.com’s Chamatkar Sandhu start asking the questions again!

Dana White however refused to answer Chamatkar’s question about whether they had booked Michael Bisping vs Vitor Belfort as the headline fight for the London card.
Dana White did however announce that Rose Namajunas would defend her belt vs. Joanna Jedrzejczyk in rematch at UFC 223
Tony Fergsuon said he wasn’t sure the belt in front of him was the real or interim belt but he was sure he was going to fight for the real belt at UFC 223.
Khabib also refused to give into any needling from Tony about tiramisu and the crowd seemed to be firmly behind Khabib as well, with cheers of ‘Khabib! Khabib!’ ringing throughout the TD Arena…but you could still feel the weight of Conor Mcgregor.