UFC lightweight champion Khabib Nurmagomedov is all set to defend his title against interim champion Dustin Poirier next on September 7th at Du Arena in Abu Dhabi.

However, there’s been a lot of talks about who will get the next shot at the lightweight title after UFC 242 and today UFC president Dana White ended all speculations and said that it’s Tony Ferguson followed by former champ Conor McGregor. 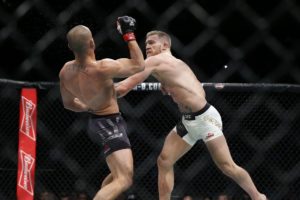 “Ferguson is the one who’s next in line,” White said in a recent interview with TSN’s Aaron Bronsteter. “Then it would be Conor.”

Conor McGregor is ranked at #3 despite not having won a fight inside the Octagon in nearly two and a half years. The last time he won a fight inside the Octagon was back at UFC 205 where he knocked out Eddie Alvarez to become the new UFC lightweight champion. Since then he has only fought once in the UFC against Khabib Nurmagomedov at UFC 229 last year where he lost the fight via submission in the fourth round.

On the other hand, Tony Ferguson is coming off of a stoppage victory over Donald Cerrone at UFC 238. He is currently riding on a 12-fight winning streak inside the Octagon.

Previous articleGierszewski and Else promise to take over after KO wins at BRAVE 24
Next articleDana White feels that Jorge Masvidal is ‘too big’ for Conor McGregor and Conor is pissed!