However a shocking revelation unfolded as former double champ announced his retirement from the sport. Despite all of that, his name has always been associated with someone or the other. This time around it was with former interim champ Tony Ferguson and newcomer yet dominant prospect Khmazat Chimaev. 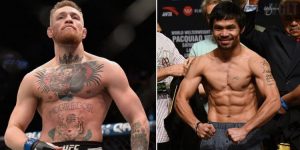 All of a sudden he took to Twitter posting “I accept”, which raised a lot of eyebrows across the MMA community. UFC President Dana White thought it was an agreement for a fight against Chimaev. McGregor however posted “I accept” in Philippines’ Tagalog language which pointed fingers to only one man – multiple time boxing champ, the legend, Manny Pacquiao.

A probable boxing fight between McGregor and Pacquiao has always been speculated. White however was quick to dismiss the idea when asked about it in an interview.

“I don’t care about any of that sh*t,” Dana White said.

Some contract negotiations might be a hurdle as well. Despite being retired, McGregor is still under exclusive contract with the UFC. White will therefore have to sign him of first before we could get any boxing related negotiations underway.

However keeping in mind the fact that White has already done that when McGregor fought Mayweather, we can’t completely shoot down the idea that he won’t do it again.

McGregor retiring to set up for an even bigger comeback?

The retirement announcement obviously sent a shockwave throughout the MMA community. The Irish sensation made his much anticipated return after earlier in 2020 and named it to be his ‘comeback season’. He claimed to fight thrice in 2020 however then COVID-19 happened which distorted the entire plan.

Yet the announcement was a huge surprise especially keeping in mind his performance after a 15 month hiatus. McGregor destroyed Cowboy Cerrone in mere 40 seconds to stamp his arrival. The MMA community might hoping be this retirement as a set up for something huge in near future as well. Especially at this interesting phase where the 31-year old is in the prime of his life.

Many options like a fight with Jorge Masvidal, Justin Gaethje, Tony Ferguson, Nate Diaz trilogy and even a title shot against Kamaru Usman was associated with McGregor. Obviously an unprecedented rematch against Khabib Nurmagomedov was always on cards. White also had McGregor fighting in the newly established Fight Island which could have been a huge revenue making option as well.