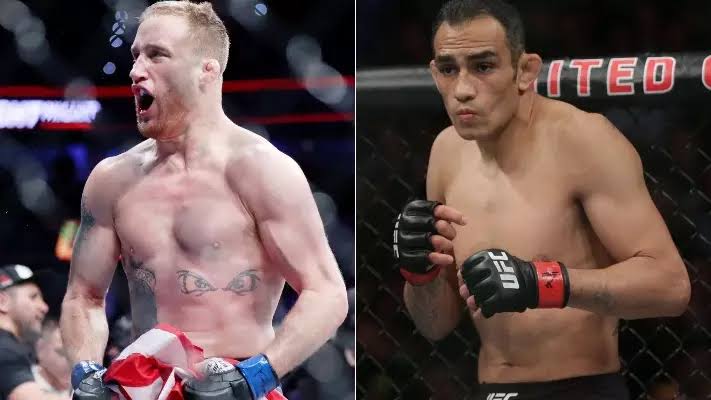 Finally some good news coming our way as #1 ranked Tony ‘El Cucuy’ Ferguson will take on #4 ranked Justin ‘The Highlight’ Gaethje at UFC 249 for the interim lightweight title.

The news was disclosed by UFC President Dana White on his social media. White’s meticulous efforts for carrying on with the UFC 249 card has paid dividends however the location of the card is still a mystery. (via Twitter):

The fight is signed and is 100% ON LIVE on ESPN somewhere on EARTH!!!! 😃@TonyFergusonXT vs @Justin_Gaethje is LIVE on @espn+ PPV April 18th for the interim lightweight belt! pic.twitter.com/aH44zg5K30

Ferguson was expected to take on champion Khabib Nurmagomedov for the lightweight title. However the fight got cancelled for the fifth time as Nurmagomedov is stuck in his home country of Russia due to travel ban. The restrictions are obvious due to rising outbreak of COVID-19 pandemic.

Ferguson is on an impressive 12-fight winning streak and hasn’t lost a fight since 8 years. Ferguson will be fighting for the interim title the second time in his career. Back in October 2017, he took on Kevin Lee at UFC 216. He defeated Lee via third round submission to become the interim lightweight champion.

Ferguson was then slated to fight Nurmagomedov for the lightweight title at UFC 223 in April 2018. However unfortunately just few days before the fight, he had to pull out due to injury by tripping over a cable. Ferguson was replaced by Al Iaquinta and was also stripped of his interim title. Many believe it was extremely unfair for Ferguson. He further cemented his title shot with two doctor stoppage TKO wins over Anthony Pettis and Donald Cerrone.

Gaethje on the other hand, has some serious momentum with a three-fight first round knockout streak. Coming off first round KO over world class competition in James Vick, Edson Barbara and Donald Cerrone, rightfully earns him an interim title shot. Gaethje hasn’t fought inside the octagon since September 2019. Reportedly he was offered fights but he rejected them for a bigger opportunity like this.

The fight booking however will create some uncertainty as to who will fight Nurmagomedov next. Theoretically the interim champion should be the next in line. However the UFC havms always been looking to set up a rematch between Nurmagomedov and superstar Conor McGregor.

Previous articleBellator welterweight Erick Silva and family positive for Coronavirus: this is what they underwent
Next articleUFC News: UFC 249 full fight card has been announced!