Today Luke Rockhold made his light heavyweight debut at UFC 239 where he fought rising contender Jan Blachowicz and it ended terribly for the 34-year old California native.

Jan Blachowicz brutally knocked out the former UFC middleweight champion in the second round with a devastating left hook. This is Rockhold’s second back to back knockout loss, before this he lost to Yoel Romero at UFC 221 last year. 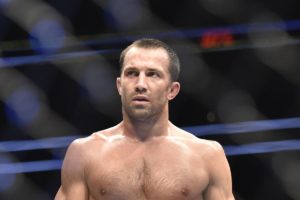 Dana White now wants to see Luke Rockhold hang up his gloves and retire from the sport of MMA. Luke is 1-3 in his last four fights. He lost his last title fight to Michael Bisping at UFC 199 via knockout as well. His sole win during this time coming to David Branch at UFC Fight Night 116 back in 2017.

“I think Luke Rockhold should talk about hanging it up,” White said at the UFC 239 post-fight press conference. “He broke his jaw tonight. So that’s the second broken jaw. He’s been knocked out viciously a few times here. Shin is all banged up. He had to skin graph and all kinds of stuff.

“He’s had a good career. He’s been a great fighter. I’d like to see him hang it up.”

“He’s got another career that he’s actually doing well at,” White said about Rockhold. “Everybody’s a f—king model, ‘I’m a model, I’m a model’ — that guy’s actually really modelling for Ralph Lauren. So good for him.”

Do you guys want to see Luke Rockhold retire from MMA?