Earlier this year, Daniel Cormier added the UFC heavyweight championship to his light heavyweight title, stopping Stipe Miocic in dramatic fashion during the first round of their super fight at UFC 226 in Las Vegas. Cormier (21-1, 1 NC) flattened the UFC’s long-reigning heavyweight champ with a right hand out of a clinch. 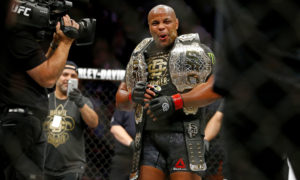 However, today Cormier has respectfully relinquished his UFC light heavyweight title and now Jon Jones and Alexander Gustafsson will be fighting for the title tomorrow at UFC 232.

“Today I am going to relinquish the UFC light heavyweight title,” Cormier told ESPN. “I am not going to be stripped of the belt that I’ve defended with my all for three and a half years. Being stripped of a title suggests you’ve done something wrong, and I haven’t.

“I’d rather walk away this way, with my head held high as it always has been, than have the history books say I was stripped. I’ve defended this title this year. I was approached with the idea of fighting at heavyweight, so I took it. I fought three times in 2018. No champion has been more active than me. I am the fighter of the year. My story and my legacy will not include me being stripped of a title. They can have it.”