Former UFC light heavyweight and heavyweight champion of the world, Daniel Cormier, has admitted to grabbing a towel at UFC 210, where he was defending his title against Anthony ‘Rumble’ Johnson. Daniel Cormier was inducted into the UFC Hall of Fame this week and during the speech, he came clean on the whole incident.

During UFC 210, Daniel Cormier was struggling with a hard weight cut and he had missed weight in his first attempt, but during the second attempt, he shed his clothes and weighed behind a towel and he had then successfully made weight. 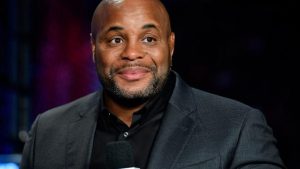 “Guys, I want to tell you something because I feel like right now is the time to be completely transparent,” Cormier said on stage. “I think I may have grabbed the towel in Buffalo.”

Daniel Cormier revealed that he had great difficulty in making weight for the title fight against Rumble Johnson. He even thought about giving up on making weight but this would have resulted in him getting stripped of his Light Heavyweight title. However, his coaches reminded him of an old-school wrestling trick that could get the job done even though he was 1.2 pounds overweight.

"I want to tell you something, because I think right now is the time to be completely transparent…

“I think I may have grabbed the towel in Buffalo." @dc_mma at his #UFCHOF speech 🤣🤣🤣 pic.twitter.com/WFJAGHAhDV

“I walked to the back after missing weight by 1.2 pounds,” Cormier explained. “It was 1.2. I tried to give it up, guys. Trust me, I tried to give it up. I had a pound to lose. They even went and called my wife to try and get me back in the tub. I said no way, this s*** is over. She told me ‘Daniel, just take a hot bath.’ I go, it’s not that simple.

“I walk back, [my coach] he goes ‘DC, do you remember the old wrestling trick?’ I said, can you stand behind me? Because there’s two — you can put your hands behind you and your person can lift you up. He said, ‘No, it’s the towel one.’”

Daniel Cormier event went a step ahead and thanked his luck because the fight took place in New York and the NYAC failed to notice that Cormier was hanging on to the towel before reading the weight out.

“Do you understand the level of ridiculousness that has to happen in order for that to work?” Cormier said. “I looked down and I could not believe my luck. I am a lucky guy. Even when I would lose, the belt would just somehow come back to me. I was like, I’m a lucky guy.

“So I look down and the commissioner’s on the floor looking at the scale. There’s a second lady and I look down — she’s right next to him, so I grab the towel and I’m like, ‘S*** we’re home free.’ [Marc] Ratner, I know I would never get you like that, but in New York, first time, you know what it is. It is what it is.”

Daniel Cormier then also went on to apologize to Rumble Johnson. Cormier defeated Johnson via submission in the second round of this fight.

What do you guys think about this? Let us know in the comment section below.