Daniel Cormier and Stipe Miocic previously fought at the T-Mobile Arena last year at UFC 226 and Cormier knocked out Miocic in the first round and became only the second person after Conor McGregor to simultaneously hold title in two different weight classes. 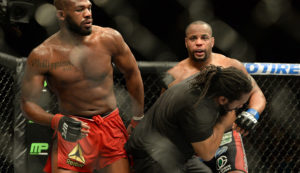 Cormier recently said on Ariel Helwani’s MMA show, that he still wants to fight UFC light heavyweight champion Jon Jones for the third time and he is willing to move down in weight class for that.

“This is my ninth UFC title fight. Why am I worried about tying my career to somebody else? I fought for the gold belt, it’s going to be 10 times in my career. So, I need no one. But if I want to fight Jones, I’ll fight Jones. It’ll be my decision this time.” (H/T – MMA Junkie)

“He beat me at 205,” Cormier said. “He’s never fought at heavyweight. It would be something completely new for him. I would want to fight on the terms that we fought prior.”

Previous articleWatch: DC on why he gave Stipe Miocic his Title rematch
Next articleMichael Bisping takes umbrage to media coverage of BJ Penn