Cormier is coming off of a knockout win over Stipe Miocic in July to win the UFC Heavyweight title. He became the second fighter to hold a world title simultaneously in two weight classes. It’s also safe to assume that he will remain in heavyweight considering he has a super fight on hold against former UFC heavyweight champion Brock Lesnar. Four months ago, after Cormier beat Stipe, he called Lesnar into the cage, and Lesnar shoved Cormier in the chest while the fighters traded insults to hype a potential future bout. 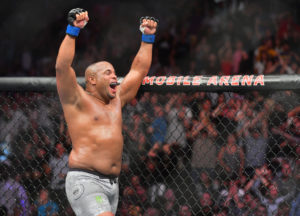 However, Cormier has said that he will only move back to LHW to fight his old rival, Jon Jones.

“I will only go to 205 to fight against Jones. It’s the only person I will go back down for. If Gustafsson wins this fight, 205 means nothing to me anymore. The only guy I will go down to fight is Jones,” he said on a recent appearance on the Ariel Helwani MMA Show.

Cormier has fought Jones on two separate occasions and has lost both the times. Last time they fought was back at UFC 214 which took place last year. He also said that he doesn’t want to fight Anthony Smith and he has a lot of improvements to make.

“He had to get carried out of the Octagon after three rounds? That’s crazy. If you get that tired, you have no chance against me. Honestly, if he fights Jones and he gets that tired, he is in trouble. You can not get that tired,” he added.

“If I have any advice for Anthony Smith going forward; Jones, Gustafsson and myself, you have got to be pushing the cardio because we are going to be pushing the whole time. Gustafsson made me work for 25 minutes, Jon Jones made me work for 25, and then 15 minutes the last time we fought. You can not be able to go 10 or 12 minutes and get that tired, you just can’t,” said Cormier.

“He’s got to really get himself, get used to or better at going at a long fight. When you get to the top of 205, they are the best in the entire world regardless of weight class. You better be ready. He fought well against Volkan, but that type of performance will not get it done against any of us.”

It was very thoughtful of Cormier to advise Anthony Smith.

Previous articleMMA India Exclusive: Arjun Bhullar on what’s next for DC – Brock or Jones
Next articleDaniel Cormier says that Derrick Lewis’s comments on him being ‘SCARED’ to fight Jon Jones are ‘BULLSH*T’