With his latest knockout win, Ngannou is now riding on a three-fight winning streak with all of his last three victories coming inside round 1. This win has put Ngannou back in the race to fight for the UFC heavyweight championship which is currently held by Daniel Cormier. 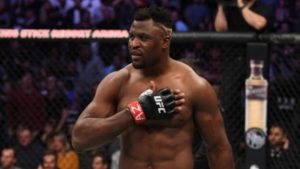 “I think he is a great guy,” Daniel Cormier said of Francis Ngannou in an latest interview with TSN’s Aaron Bronsteter. “I like Francis, he is very respectful. But, I think everybody now is… I think everybody now has to take a step back. Because nothings changed. This is the same thing that we saw prior to his title fight. Just remember that.”

Daniel Cormier on Francis Ngannou: "Everyone needs to take a step back because nothing's changed."

”You guys have to slow down. You get excited and fall in love with these knockouts. But nothing has changed. He did that to Overeem to earn a title fight. He knocked out all those guys prior. Nothing has changed. As much as I respect him, it is not a fight I would have much hesitation in taking.” Cormier continued.

ONE Championship aiming to make US debut in 2020

Previous articleWho are you Supporting in this Fantastic Main Event Matchup? #UFC239
Next articleDaniel Cormier talks about a potential trilogy fight with rival Jon Jones