DC about Stipe Miocic: I’m going to break him like Jones almost did me 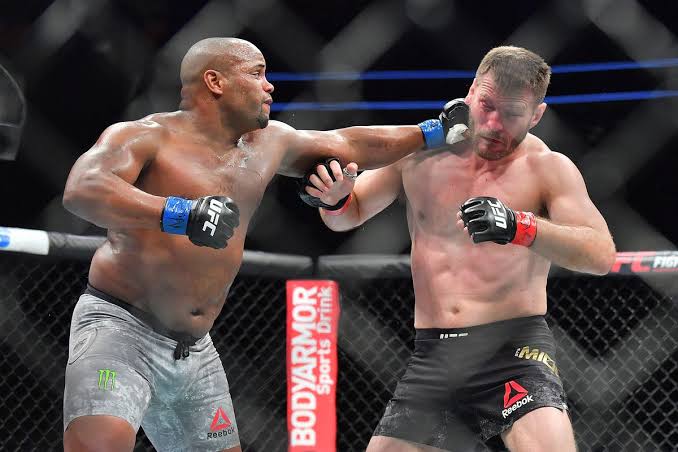 The atmosphere surrounding the rematch between Stipe and DC is very different from how it was during the first time around. Prior to UFC 226, Stipe was ,as usual, a class act. And in his vicinity, even DC maintained his cool.

But after being knocked out at the hands of Cormier, Stipe has never been the same man again. He has constantly been on a rant for a rematch, not accepting any fights in the time being. Cormier, on the other hand, as already defended his belt once. And when DC’s potential career ending fat pay cheque in the form of Brock Lesnar went missing in action, Stipe finally got what he wished for.

The rematch has finally been finalized for UFC 241. But this isn’t the same Stipe that DC fought an year ago. As soon as the news of the fight broke, he has been launching verbal onslaughts on Cormier, something which isn’t very characteristic of him. Earlier this week, the part time firefighter Miocic, called out Cormier for being an idiot.

True to his image, DC wasn’t the one to take any form of insult lying down. He has promised to break Miocic like Jones almost did to him.

“Fighters, we’re a different breed,” Cormier said on his Talk and Talker podcast recently. “Right away I was like, ‘Oh Stipe, son of a b*tch.’ But I like it though because the first time he’s all chummy and he’s all quiet and he doesn’t want to build a fight. Now at least he’s being vocal about how he feels. Be vocal. Tell me how you feel and that you want to kick my ass so when I kick your ass again, then you’re like in a dark room, just done.

“He’s gonna be done. After this one, it will be very hard for Stipe to get back to where he once was because this one’s going to break him. I know what the second Jones fight did to me. It almost broke me. But all my life experiences – my father, my cousin, my daughter, my roommate – all those life experiences allowed me to keep things in perspective, whereas he hasn’t really had to do that. So when he loses in this spot, I don’t think he’ll be able to recover from it. It’ll be too much.”

UFC 241 has shaped up to be a potential card of the year. The card features the return of the Stockton, California native Nate Diaz who will be pitted against Anthony Pettis. Meanwhile, Yoel Romero vs Paulo Costa has been booked for the umpteenth time with the hope that the fight will happen this time around.

Watch: DC on why he gave Stipe Miocic his Title rematch