The inaugural Bare Knuckle Boxing took place today at the Casper Event Center in Casper, Wyoming and the event was named as WBKFF 1: Rise of the Titans.

The fight card was stacked with former UFC and Bellator champions and the fight card had a decent amount of public interest as numerous MMA blogs ran live updates throughout the event.

The card featured former UFC welterweight champion Johny Hendricks who fought Dakota Cochrane, although he was initially supposed to fight Brennan Ward who pulled out due to contractual issues. There were also other former UFC fighters on the card like Phil Baroni, Chris Leben, Josh Neer, and Isaac Vallie-Flagg. 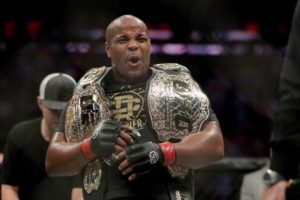 The main event and co-main event were extremely wild as in the co-main event, Johny Hendricks got knocked out in the first 22-seconds of the second round by Dakota Cochrane.

The main event featured Chris Leben and Phil Baroni, which was a very intriguing matchup, but Phil came out swinging wild takedown attempts which is illegal in Bare Knuckle Boxing. Chris Leben landed a straight counter which knocked down Leben and he failed to beat referee’s count. Leben won the fight via TKO at 1:19 of Round 1.

Even current UFC heavyweight champion took to Twitter to post how bizarre Bare Knuckle Boxing was, he said it was rthe craziest sh*t he had ever seen.

This bare knuckle boxing is some of the craziest shit I’ve ever seen!

Daniel Cormier is coming off of a second-round submission victory over Derrick Lewis at UFC 230 in Madison Square Garden Arena in New York City.