DC may not fight Brock Lesnar as his final fight after all; itching for the Jon Jones trilogy fight

Daniel Cormier is currently reigning as the UFC’s heavyweight and light heavyweight champion. Cormier won his second UFC divisional title this past summer at UFC 226. He knocked out Stipe Miocic for the historical accomplishment. 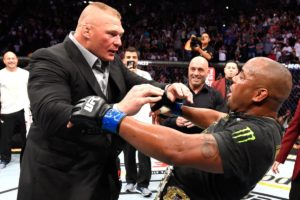 “Counting the Lewis fight, I think I’m down to two fights left,” Cormier told ESPN. “Maybe this will be a blessing in disguise, the fact that I don’t have a crazy, long fight camp to beat myself down. That may prolong it for me, but right now, I think I have this one and maybe one more. I can still fight in March and hit my retirement date.”

He said, “The one opponent that would matter to me most is Jones, because he’s beaten me twice.”

“I would not have accepted a rematch against Stipe Miocic on short notice, he’s too good under these circumstances,” Cormier said. “I’m not saying Derrick isn’t good, but Stipe is capable of beating me in different ways. He does different things well. I think in this fight, Derrick has to knock me out to win.

”Usually, if a guy only has one path to victory, I do pretty well. Yes, I will admit the opponent factored into this.”

Daniel Cormier returns next month against Derrick Lewis at UFC 230 to defend his UFC heavyweight title at Madison Square Garden in New York.

Previous articleKhabib issues chilling ultimatum to the UFC: If you cut my brother, I’m gone too!
Next articleBrian Ortega will fight at UFC 231 – whether Max Holloway does or not!