DC undecided on Jon Jones trilogy fight: I’m at a different time in my life

Daniel Cormier, at some point later in time, will be in the conversation for the greatest fighter of all time. However, that conversation will never be complete untill one brings up Cormier’s bête noire, Jon Jones.

Jones and Cormier share an almost inseparable fate. The two juggernauts have had one of the bitter feuds in UFC history. When both of them met, verbal carnage was almost a guarantee.

Jones has, many a times, been propelled to the GOAT status. The youngest champ in UFC history was on a tear untill his out of the cage antics led to a slight downfall. Right around then DC burst onto the scene slamming his way towards dethroning Jones’ legacy. While Jones was fighting battles related to his drug abuse, DC took over to become the ‘champ-champ’.

And now while it looks that the way things are being developed, Jones and DC will face down for the third time. Jones is the 205 pound champ while DC is making easy work of fighters in the heavyweight division.

But DC doesn’t seem as excited about the pairing as he would have been before. At 40 years of age and retirement looming over his head Cormier knows that the legacy that he has built doesn’t need a “Jones” approval.

“When it comes to Jones, I know now with all that I’ve accomplished, I don’t need that fight,” Cormier explained when speaking to MMA Fighting. “I’ll be fine regardless but it will be something we revisit, me and my team, my management and everybody else and we’ll see if it’s something we want to do. Ultimately it will be my decision. 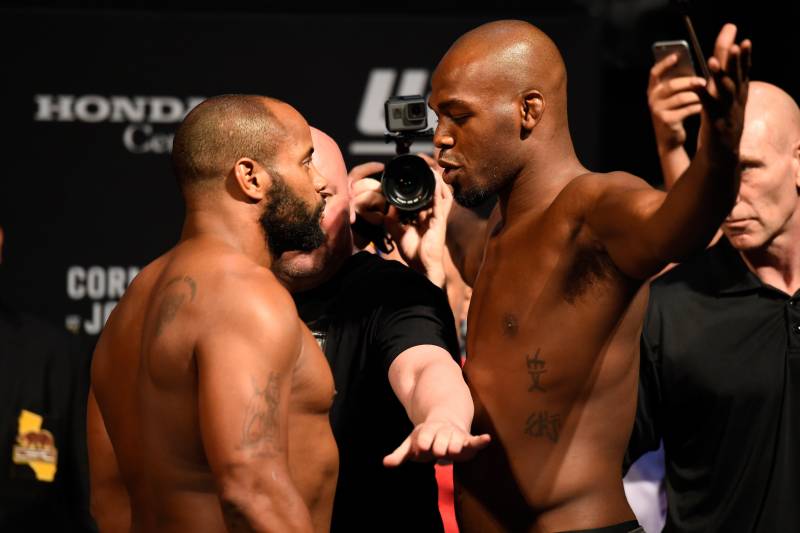 “Things are different. I feel like Jones is competing so many times because he has to try and one, regain the faith of the fans, but also retake his place in the sport and I did that. My place is secure with no question marks, no issues in regards in what I’ve done. It would ultimately be up to me to see what I want to do.”

The pair first met at UFC 182 when Jon defeated DC fair and square. The second finally came to fruition at UFC 214 after a series of cancelled events. Even though Jon defeated Cormier, the decision was later turned to a draw after the former tested positive for a banned substance.

The incident has had a profound effect on Cormier. People like Dana White are very much interested in a third pairing. But DC now fears that a third meeting will also be marred by such an unfortunate eventual outcome.

“I think at this point in my career and my life, if you ask me these questions three years ago in 2015 after I lost to him the first time, I’d get all kinds of fired up about everything Jon Jones. Now I’m at a different time in my life,” Cormier said. “Maybe I’ve lost faith in the honor of the sport because I feel that if we fight again, at the end of it win or lose, something extra will always be tied to it and I’m not talking about past interactions.

“I’m talking even after this next one, something will happen and it will just ruin it. Even after our last fight, I was ready to move on. Like OK, you got me and look what happened. I guess I just lost faith in everything.”

Right now Cormier has his eyes fixed on defending his heavyweight belt against the man who he took it from. While Jones and DC are a cult above the rest, Stipe is a different beast in himself. He held the record for the longest reigning heavyweight champ in the UFC. And despite having beaten him once already, Cormier is not looking past him at all.

“Right now I’m so focused on Stipe Miocic because here’s the deal. At 205 [pounds], I’m not fighting guys like Volkan Oezdemir anymore, no disrespect to Volkan or Anthony Smith or Thiago Santos. I’m fighting the greatest heavyweight of all time,” Cormier said. “I think I need to be solely focused on that right now.”