Looks like controversy and Alan Fernandes go hand in hand. After making international headlines for not stepping in during the now infamous fight between Asha Roka and Hannah Kampf couple of days ago, Alan was once again put in charge as the referee the very next day! And if that wasn’t indicative of the dire need for intervention in Indian MMA, Alan once again found himself in the middle of a controversial decision.

Delhi Heroes took on Goa Pirates in the second semi finals of the Super Fight League. With a spot in the finals at stake, one would’ve thought that the promotion and AIMMAA would temporarily put Alan on suspension, and bring in a different referee. However, the MMA fans and pundits were left puzzled, when Alan was once again given the refereeing duties. While the heads of Super Fight League and AIMMAA could’ve done without any more controversy, the MMA Gods weren’t as kind.

The fifth fight between Delhi’s captain and showboat aficionado Jason Solomon and Goa’s Satinder Bankura was a crucial one for Goa. With a win, Goa would’ve reduced the point difference, and would’ve been back in contention to secure a spot in the finals. However, a loss meant Goa’s chances of going to the finals were well and truly gone.

And while Alan told us in our recent interview that he doesn’t want to be the centre of attention, the spotlight was definitely on him, and Alan’s refereeing was once again brought under the scanner.

During the first round, both the fighters scrambled, leading to Jason managing to take Satinder’s back. Jason then tried to lock in the RNC, and managed to get body hooks in place to hold Satinder’s position. However, what transpired next left everyone speechless, as Jason, in an attempt to subdue Satinder, inadvertently low blowed him with his heel.

This resulted in Satinder wincing in pain, as he stopped defending the RNC. Solomon proceeded to lock in the choke, as Bankura looked at the official in a desperate effort to stop the fight. Satinder eventually tapped out, giving Delhi the victory.

While this can be seen as a mistake that can happen to anyone, the fact that the same referee was involved in a highly controversial fight just 24 hours before brings the intention – and the sanity – of AIMMAA into question.

Not only did a fighter get an undeserved ‘L’ on his record, Goa Pirates will be justifiably feeling betrayed. The fact that they had won their last fight meant that, with a win over Solomon, they could’ve tied with Delhi by the end of the evening.

AIMMAA needs to be held accountable for their actions

If we forget about everything else that has gone wrong in the past one month, the fact that two crucial – one nearly fatal – mistakes have happened in just two nights underlines the need to hold AIMMAA, and those in charge accountable. While mistakes do happen, the fact that AIMMAA did not bring in another official to referee the fights after the catastrophic – and in all fairness, shambolic – mistake that happened this past Friday night proves that AIMMAA, at least at this point, operates with zero accountability.

While people do talk about encouraging a niche sport, it is of utmost importance to understand that the officials work for the fighters, and not the other way round. We will be talking to the concerned people from SFL and AIMMAA in the coming days to sort out these issues, and understand the changes the promotion and the self – regulated commission have in store, to ensure transparency and fairness going forward.

Here are all the results from Saturday’s event:

Jacky Gahlot defeated Krishan Rawat by TKO in round 1

Abdul Azeem Badakhshi defeated Mukesh Gora by TKO in round 1 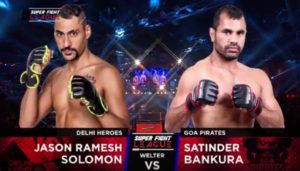