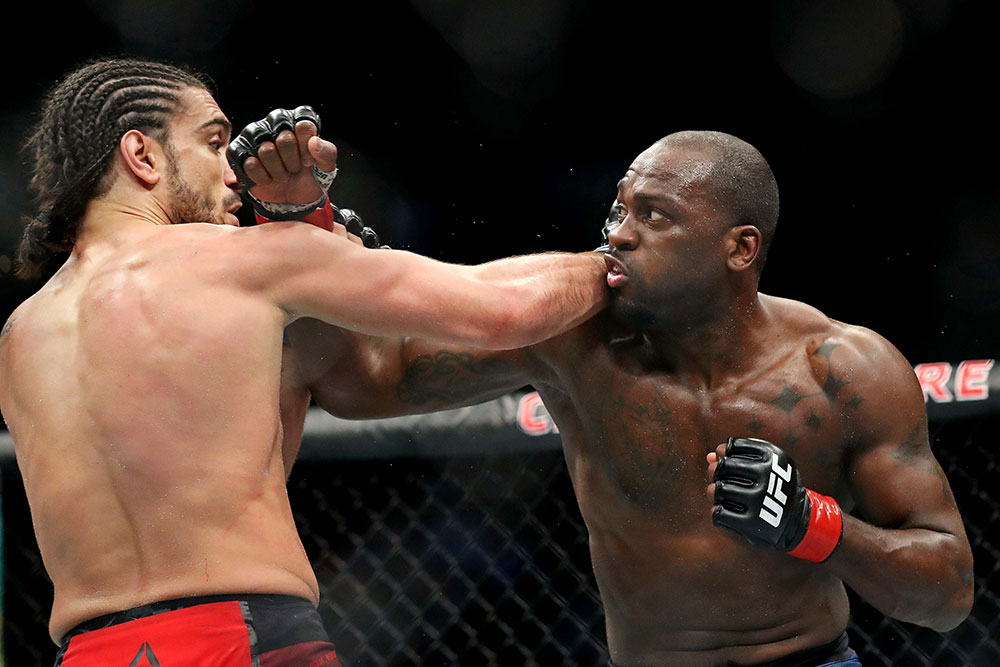 Derek Brunson could have knocked himself out last Saturday.

It was a good day for Derek Brunson, the 35-year-old middleweight, as he beat Elias Theodorou by unanimous decision, at UFC Ottawa co-main event. By doing this, he got out of a two-fight losing streak. He showed the world that he can win.

Three minutes before the fight ended, Brunson did something that could have easily backfired and might have changed the eventual result of the match. Brunson picked up Theodorou and brought him down with a big slam. However, there was a risk of Brunson knocking himself out. He was lucky that did not happen.

During the post-fight interview, Derek Brunson said the following :

“That was my exact thought,” Brunson said. “I picked him up, I locked my hands, I was like, oh, that kid—I think it was Jarred Brooks or something like that—he went, he swung, he dunked him and knocked himself out. I was like, if I knock myself out, it’s gonna be real bad. So I swung his legs and I swam back over and I got north-south position.

“But yeah, I wanted to make sure I didn’t knock myself out. That wouldn’t look good. I would have made ‘Sportscenter Not Top 10’ or whatever. That would have been bad.”

“It’s funny, I’m a knockout guy. In my previous wins, I think all of my last seven wins I got were knockouts in the first round,” Brunson said. “To come out here and get a decision after a rough year, it feels good. Now I’ve got that built in my mind. I can go the distance with a guy who’s known for cardio, who moves around a lot, pretty much had to chase a little bit. So I can take my time and be patient, I know I can knock guys out still.”

“You’ve got to keep evolving. I heard him saying all week it’s checkers vs. chess,” Brunson said. “I’m a smart guy, I like to think of myself as a smart guy, but sometimes I go out there and do a lot of dumb stuff. So to actually come back and get a smart win, I feel really good about that.”