Derek Brunson explains why he wants to fight Jack Hermansson

In a recent interview with TMZ Sports, UFC middleweight contender Derek Brunson spoke about his next desired fight to make. 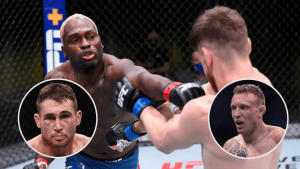 He wishes to challenge the #4 contender Jack Hermansson citing the reason being his focus on winning fights against the TOP 5 contenders of this division. He now wishes to climb the UFC Middleweight rankings at a much faster pace which according to him can be only accomplished by beating the Top 5 best fighters of the division. That being said, and all the other Top 5 fighters being booked – this match makes the best case for Brunson.

In his last fight, Brunson handed Edmen Shahbazyan his first-ever loss in MMA. This shook up the MMA world as before coming into this fight- the odds were +300 underdog for Brunson. This now puts him in a 3 fight winning streak, and in a hungrier position to grab a chance at fighting the best fighters of his division.

Brunson is currently ranked #7 in the middleweight division with an MMA record of 21-7. Meanwhile, Hermansson is coming off a win against the talented Kevin Gastelum. His MMA record stands at 21-5 and 5-1 in his last six matches. This impressive record of the recent past of both these fighters makes the line up all the more exciting and power-packed for the fans.

Brunson in his last title run?

Brunson is currently aged 36 and has only a few years of fight left in him, which is why this title run is so important for him. He displayed championship level performances against Edmund, Ian Heinisch, and Elias Theodorou by coming out as victorious on all three occasions. Maybe now is the time when he fully prepared and ready to make his most impactful title shot run in his long-spanning career. Brunson had even mentioned Darren Till as his next preferred opponent in the past but recently zoomed in on Hermansson.