Derrick Lewis ended his two-fight losing streak at UFC 244 when he beat Blagoy Ivanov via split decision at the Madison Square Garden in New York City.

Lewis was in terrific shape and it was an entertaining fight from beginning to the end as both fighters landed huge bombs on each other. The fight was an extremely close one and in fact, Lewis admitted that he could have done more in his fight against Ivanov. 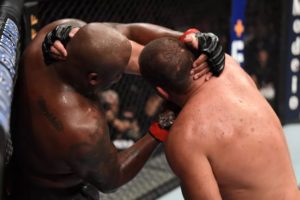 In a recent appearance on Ariel Helwani’s MMA show, Lewis admitted that he lost to Blagoy Ivanov.

“Yeah, just because of the takedowns, that is about it. I was surprised, too. I thought for sure he was going to throw more elbows and try to ground and pound me out right then and there,” he explained. “But, he didn’t so I was like okay, keep doing that and I’ll catch my breath.”

“I also could have done a lot more than I did,” he said. “I should have been more active instead of being so hesitant to throw a punch and a kick.” (H/T – BJPenn.com)

Do you guys agree with Derrick Lewis?