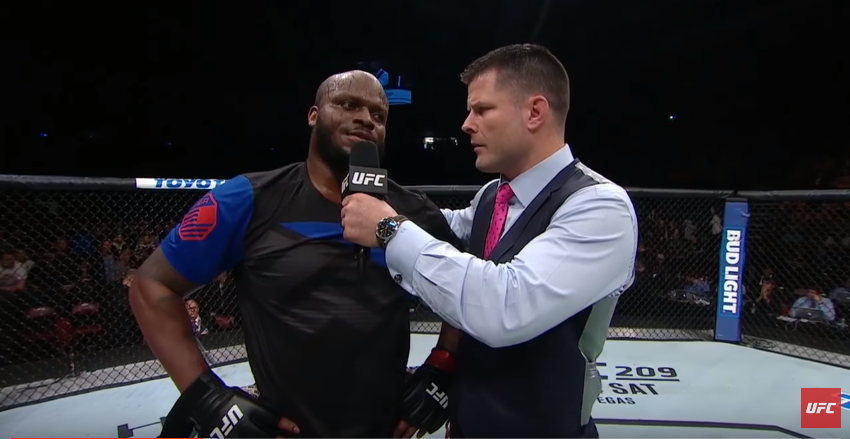 Derrick Lewis made a huge statement this Sunday night with his second round knockout of Travis Brown. But as is almost always the case with big UFC fights these days, the fight was not without minor controversies. Some people have deemed the stoppage to be a bit late and believe Travis Brown ate too many unnecessary punches. Although, more controversial (and possibly as entertaining as the fight itself) was Lewis’ post fight interview. Equal parts hilarious and controversial, Lewis didn’t shy away from anything. When asked about the body shots that clearly hurt him, Lewis said the following:

“I just gotta do No. 2, that’s all,” Browne stated in his Octagon interview. “It’s not really hurt from the kick. I just got to boo boo (sic.).”

“It was more just trying not to s—t on myself,” Lewis elaborated at the post-fight press conference. “I’m holding my gas in and trying to breathe and at the same time I didn’t want to shit on national TV.

“I just eased out a little fart. Tried to clear out my stomach a little bit. Once it did that it was good. Then the second round it came back again, just started bubbling. I was like, ‘I’ve got to end this fight.’”

Now that’s funny! This is nothing we don’t expect from Derrick Lewis, who is known for his sharp wit on twitter. However, that is not the controversial part. When asked about his opponent, never the one to shy away, Derrick Lewis quickly brought up the domestic abuse charges levied against Travis Browne in 2015.

“He call (sic) himself a man, but he likes to put his hands on women. So, forget that guy. I got much more heart than he has. Where’s Ronda Rousey’s fine a** at?”, Lewis said. It should be noted that none of these allegations have been proven and UFC cleared ‘Hapa’ after conducting a private investigation of the matter.

Some believe Derrick Lewis’ statements were in poor taste. There’s an unwritten rule in combat sports that requires fighters to not talk trash their opponents after having fought them. The best example of this came when Conor McGregor called Jose Aldo a great champion after knocking him out at UFC 194 in December 2015. This came after almost a year’s worth of trash talk, mostly one-sided in McGregor’s favour. “Humble in victory and humble in defeat”, Conor likes to say. He again showed great humility after his loss to Nate Diaz last year.

The bigger problem with Lewis trashing Browne is not that he did it after the fight. It is that he went personal. Another unwritten rule in professional sports states that you are never supposed to talk about someone’s family. Not only did Lewis mention Browne’s past of alleged domestic abuse, he name-dropped Ronda Rousey, who is Travis Browne’s girlfriend.  “Where’s Ronda Rousey’s fine a** at?”, Lewis said. Way to kick a man while he’s down! Although it is indeed a little difficult to feel sorry for Travis Browne because he wasn’t exactly kind to Brendan Schaub after knocking him out in the first round in December of 2014. It should be noted that Schaub and Rousey used to be a couple. Browne has over the years taken up every opportunity to remind the public that he beat the s*** out of Rousey’s ex.

One instance of trash talk going personal occurred when Conor and Eddie Alvarez were doing a press conference leading up to their fight at UFC 205. Eddie repeatedly hinted that he knew what was Conor’s big post fight announcement was. When asked, he said: “Conor’s having two kids and his girlfriend is not having twins – so you guys do the math.” Conor didn’t respond. Imagine Conor being the bigger person!

Michael Bisping and Luke Rockhold had an ugly war of words after Bisping knocked out Rockhold at UFC 199 which culminated in Bisping using a gay slur against Rockhold. Although he immediately apologized, the whole incident put in bad a light, a moment that should have been one of the best in MMA history.

Ronda Rousey, who was a targeted by Derrick Lewis on Sunday, was herself a tremendous trash talker when she was destroying everyone in her path. She famously called Holly Holm a ‘fake humility b****’ prior to their fight in Nov, 2015. Ronda was greatly angered when Bethe Correia said that she hopes Rousey doesn’t kill herself after Correia beats her. This was highly offensive, obviously, because of Rousey’s father committing suicide when she was just a child.

If we go back into the early days of the sport, recently retired Tito Ortiz used to be the man. His beef with his former manager and the eventual UFC President Dana White is legendary. So much so, that Tito once wore a T-shirt to weigh-ins, on which was printed – “Dana is my b****.” Bad boy indeed! 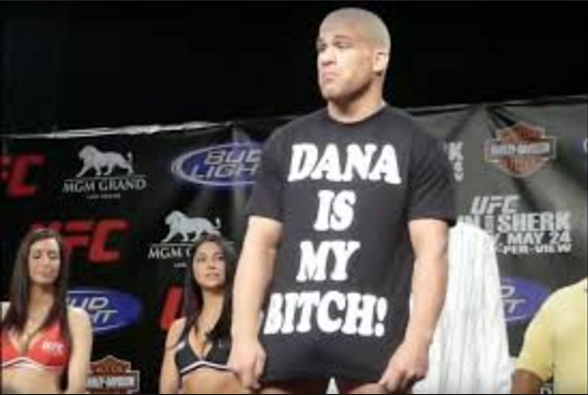 Chael Sonnen is considered one of the greatest trash talkers in the brief history of the sport. While it is impossible to list all the times Chael crossed the line, there is one incident that sticks out. While talking to Mauro Ranallo way back in 2011, Chael said:

“You tell Anderson Silva I’m coming over and I’m kicking down his backdoor and patting his little lady on the ass and I’m telling her to make me a steak, medium-rare just how I like it.”

We can chalk that up to Chael being Chael but Anderson Silva was highly offended by Chael mentioning his wife. Another name that just has to be mentioned is Nick Diaz. He is the one guy who keeps it real at all times. “I will beat you to the ground in front of your nice life and your nice wife”, the older Diaz recently said. Diaz was once asked if he was high (Diaz brothers’ love of marijuana is well documented). His response will tell you all you need to know about the man:

Trash talking is way more prevalent in combat sports like MMA and Boxing than other sports. Combat sports are heavily reliant on an individual’s star power, more so than any other sport. Because of this reason, trash talk is not only tolerated, it is actively encouraged by an organisation like UFC which is heavily dependent on stars to generate revenue.

Who can forget ‘Iron’ Mike Tyson saying he wanted to eat Lennox Lewis’ children prior to their heavyweight showdown. The history of trash talk going personal in combat sports is old. Mohammad Ali wrote the book on getting inside an opponent’s head by making very personal statements about them. Nobody can ever forget Ali standing outside Sonny Liston’s house with a megaphone calling him a bum. Here is a little bit of what he said:

“After the fight, I’m gonna build myself a pretty home and use him as a bearskin rug. Liston even smells like a bear. I’m gonna give him to the local zoo after I whup him… if Sonny Liston whups me, I’ll kiss his feet in the ring, crawl out of the ring on my knees, tell him he’s the greatest, and catch the next jet out of the country.”

Hilarious for us, not so much for Liston, who subsequently lost twice to Ali.

But outside of combat sports, with few exceptions, trash talk is not seen all that much. The biggest reason has to the lack of tolerance for such activities in other sports. Also, other sports, specially team sports, are more reliant on the sport being popular rather than relying on stars. Even in highly testosterone fueled sports like Basketball and Baseball, where aggression on the field (or court) is rampant, players almost never talk trash outside of it. They are heavily fined when they do. It is impossible to imagine Roger Federer talking trash to Rafael Nadal, who are the greatest rivals in the illustrious history of Tennis. While Virat Kohli is generally known as a hot head, one can never imagine him poking fun at Steve Smith’s family just because the two captains are supposed to face each other very shortly. It is safe to say, that the public would never condone it if any of the above mentioned things happened in any sport other than Boxing or MMA. Our minds are programmed to accept, or even enjoy and look forward to, trash talking in MMA and boxing. The reasons are not quite clear, but these are not your normal sports. This is violence, this is warfare. Nick Diaz said it best (he was suspended for five years by the Nevada State Athletic Association for testing positive for marijuana metabolites at the time):

This is not a sport. This is warfare. If a person allowed to pound on someone till they are unconscious and we watch it, then a little trash talk should be okay. That should be the least of our concerns. Maybe Derrick Lewis crossed the line, but that will happen from time to time in a sport where violence is an indicator of greatness. Let’s end the rage and move on.