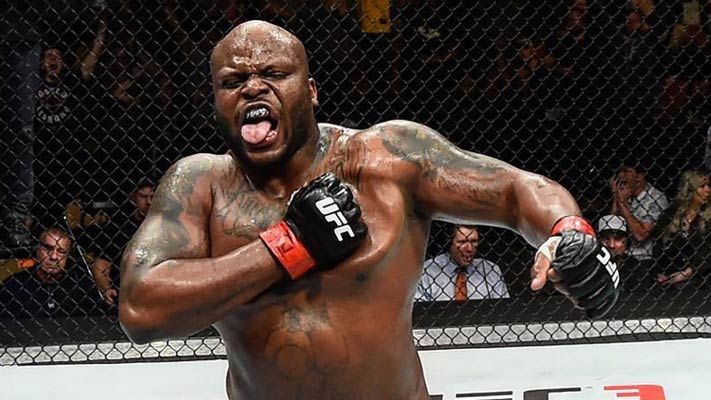 Derrick Lewis is set to face Daniel Cormier as the main event at UFC 230. The two heavyweights are set to clash for the UFC Heavyweight Title, but according to Derrick Lewis, for him, this means having to make a sacrifice. Lewis will have to postpone his plans of getting high on Joe Rogan’s podcast (Thanks to BJPenn).

Lewis rose to sudden prominence following his final round Knockout of Alexander Volkov at UFC 229. However, it was the post-fight interview that went completely viral. Immediately after the fight was over, Lewis took off his pants, before putting them on again prior to the interview. When asked why he had taken his pants off, he replied that his ‘b***s were hot’. He later went on to say that he was looking forward to getting on Rogan’s show and would ‘smoke some weed’ with him.

However, it does not look like this will be happening. Derrick Lewis told reporters this Thursday, that if it were not for the fact that he was facing Daniel Cormier in a title fight at UFC 230, he would be in LA, on Joe Rogan’s show, getting ‘high as hell’.

While he is hoping to win the UFC Heavyweight Title, he would not be disappointed if he did not end up winning it.

Either way, after the fight is over, Lewis may be looking to go onto Rogan’s podcast to fulfil this wish.