Despite what Ali Abdelaziz says, Dana White confirms that Khabib Nurmagomedov vs Tony Ferguson is next

As Khabib Nurmagomedov is serving his suspension for the UFC 229 post-fight brawl, he has made it clear that he will be out of action until October. He was also fined a staggering ₹3.6 crore ($500,000) by the Nevada State Athletic Commission.

Although it’s unclear as to who he is going to fight, most MMA fans want him to fight former interim lightweight champion Tony Ferguson who is coming off of an impressive win against Anthony Pettis at UFC 229. 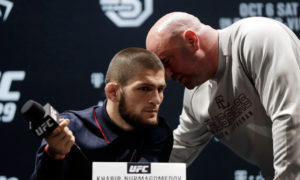 But according to Khabib’s manager, Ali Abdelaziz who recently appeared on Ariel Helwani’s MMA show has said that Tony doesn’t deserve a title shot despite being on an 11-fight winning streak.

“Tony is a 36-year old twig. This is what he is, a skinny twig that gets dropped every fight. The guy is a mental midget. He blocked me, one day off, one day on, he blocked Khabib. He’s a confused individual,” Ali said.

However, UFC president Dana White doesn’t believe in what Ali said and according to him, Khabib Nurmagomedov will fight Tony Ferguson despite what anyone says.

Both Khabib and Tony were scheduled to fight on four different occasions, but none ever came to fruition.

Previous articleMichael Chiesa picks between Tyron Woodley and ‘Marty from Nebraska’ in the UFC 235 title fight
Next articleDana White: Conor vs. Cowboy is the fight to make in the summer
- Advertisement -