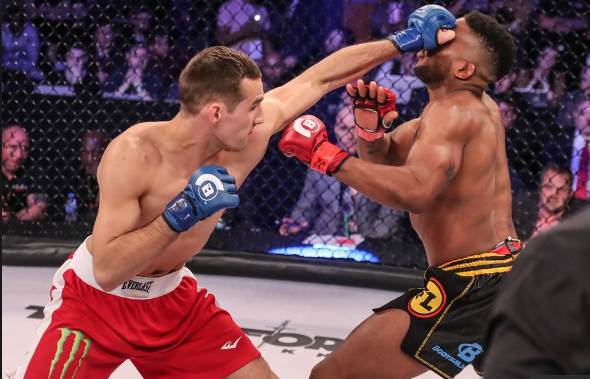 Rory MacDonald finally tasted victory again after over two and a half years when he tapped Paul Daley at Bellator 179 in London. With the win, which was complete dominance for Rory by the way, he proved that he is one of the best welterweights in the world. And with such a dominating win, from a guy who everyone knew was an elite welterweight, the question again arises: did UFC make a mistake letting Rory go? ‘The Red King’ thinks so and so do a lot of fans and pundits of the sport.

Fighting out of Montreal, Quebec, Canada, Rory MacDonald was long considered the heir-apparent to Georges St Pierre’s welterweight crown. ‘The Red King’ piled up one impressive victory after another in UFC enroute to a title shot against then champion Robbie Lawler in 2015. Both his losses at the time – against Carlos Condit and Robbie Lawler – he could have arguably won. In their rematch at UFC 189 for the world title, Lawler and MacDonald put on what is considered by many as the greatest UFC fight of all time. Again, Rory lost a fight that he was arguably winning. It was after this fight that Rory finally realised that he was making too little money to visit death’s front door:

“The experience itself, the fight was great. I loved it. It was a great thing for me and my martial arts career,” MacDonald said. “But, you know, a performance like that and everything I did leading up to it in my career with the UFC, I feel like I should be left a little bit more financially stable. I still make good money, but I still feel that I was worth more. That I brought more to the table than what I really got.

“So I just have to really fight for what is right, on the business side now. And I guess getting to that point, to the world title and stuff, after a hard fight like that, it just opened my eyes to it. Okay, now it’s time to get a little more business savvy rather than just do whatever just to get to the big fight.”

After a second loss in a row (to Stephen Thompson), Rory MacDonald, in the prime of his career, decided to leave the UFC and join Bellator. Just the fact that UFC did not match Bellator’s offer to Rory MacDonald was mind-boggling to a lot of people in the industry. While Rory was coming off two tough losses, both those losses were against highly skilled opponents and Rory came within an inch of winning the welterweight title in one if those losses. He was still one of the top welterweights in the world and was only 27 years of age, arguably yet to hit his prime. After GSP went out on his hiatus (which he’s yet to return from), MacDonald was UFC’s only big Canadian star. This little tidbit made his departure from the UFC even more curious. At any rate, it was a mistake on UFC’s part to let Rory go, especially considering the fact that both the current UFC welterweight champ Tyron Woodley and the presumed number 1 contender Demian Maia have lost to Rory MacDonald.

Rory appeared on the MMA Hour with Ariel Helwani this Monday and said that the UFC ‘messed up’ letting him go:

“Maybe [the UFC] should be a little more cautious on how easy they let things slip through their fingers,” he said. “Because, like I’ve tried to say in the past, fighters can’t always be on 24/7 every single time they step into the ring. So, you have to allow for these performances that aren’t up to par, that you would normally see. I think they definitely messed up when they let me go. That’s their fault and Bellator’s gain, you know?”

On the same show, his Tristar teammate Kajan Johnson claimed that Rory MacDonald is making $400,000 per fight with Bellator. If that is indeed true, it puts some light on why UFC didn’t match Bellator’s offer to Rory. This amount is more than UFC pays some of its champions! In any case, good for Rory. He deserves it.

The big winner in this deal, aside from Rory, is Bellator MMA. Not only did they acquire a big-name fighter who has the following of a whole country, they acquired a guy who is still in his prime and is easily one of the best in the world at his weight class.  MacDonald likely will challenge for the BMMA welterweight title, after Douglas Lima defends it against Lorenz Larkin at Bellator’s pay per view in New York on June 24. This is Bellator’s one great chance to build a division around a talented fighter, provided Rory keeps winning the way he won last Friday. ‘The Red King’, however, is very confident:

“I think I’m the best in the world,” MacDonald said. “Lima had a pretty hard fight with Daley. I went out there, and I smoked him in every discipline. It was a message that I’m on another level, and these guys are going to have a lot of pain to deal with if they get in the cage with me.”

During his post-fight interview, after beating Daley, he warned both Larkin and Lima:

“I guarantee I will take that belt from you,” MacDonald said. “And I will take your health.”

That’s as frightening a statement as any! If he becomes the champ, he will have a legit claim at being the true world champion, since he’s beat both Woodley and the likely next challenger, Maia.

Rory MacDonald may yet end up claiming GSP’s empty welterweight throne. He looks rejuvenated, confident and only turns 28 this July. Here’s to wishful thinking!

Previous articleExclusive: Marc Diakiese talks about adversities, and his journey to the UFC
Next articleYoel Romero vs Robert Whittaker to fight for interim belt at UFC 213