Former UFC welterweight Diego Sanchez and the winner of The Ultimate Fighter 1 was released by the UFC last week after remaining with the promotion for sixteen long years.

Diego Sanchez was scheduled to fight another veteran in Donald Cerrone at UFC Vegas 26 scheduled to take place later this week at the UFC’s Apex facility in Las Vegas.

Diego Sanchez cleared the air around the entire saga in an emotional interview on MMA Today hosted by UFC light heavyweight Anthony Smith and RJ Clifford. 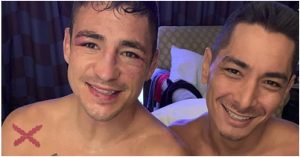 Diego Sanchez said that he was fearing for his life and was afraid that the UFC might get him killed for exposing the promotion.

“I’m going to tell you guys frankly right now, I’m fearful for my motherf*cking life,” Sanchez said. “I’m fearful that this company, this billion-dollar company monopoly, worldwide, is going to come after me. Something might happen to me in two years. Maybe in a couple years. Maybe I wreck my truck. Maybe I, ‘Oh, Diego overdosed, some suicide sh*t.’ I don’t know. But I would not put anything past the level of evil that is within this corporation.”

“If I was to expose some of the stuff that I know about, because I’ve been in this motherf*cker longer than than anybody else, and been the only one that survived the b*tch, that went through the dark tunnel and came out the other side.”

Diego Sanchez further added that he felt betrayed by the UFC and is still open to talking with Dana White.

“All you people don’t get it,” Sanchez said. “And I’m going to say this. Dana, what’s up Dana? I tried for two years to get a meeting with you. Oh, sh*t, I was the first Ultimate Fighter. Didn’t that show do something for the company when it was $60 million in debt. … And you can’t meet with your boy? … I’ve put 60, 70 hours in the UFC PI just to try to get a meeting with you Dana, but you won’t meet with me, because you won’t hear what I have to say? You don’t want to talk with my batsh*t crazy manager? Why, because he might bring some awareness to what you’re hiding in the dark?

“I’m still open to meet with you Dana. Be a f*cking man. Be a real f*cking boss, when I’ve bled, I’ve sweat, I’ve f*cking cried for this f*cking company. I’ve sacrificed more than you will ever know, and you can’t have 45 minutes?” (H/T – MMAFighting.com)