Like him or hate him, there’s no doubt that Jake Paul has established himself as one of the biggest names in combat sports- not for the way he fights but for the way he can bring in the PPV buys. While many in the MMA and Boxing fraternity detest the YouTuber-turned-professional boxer for becoming such a huge name in the sport in such a short period of time, many are also happily willing to step inside the ring against Jake to throw some punches, and Dillon Danis is the latest who is ready to sign himself up.

The rise of Jake Paul in boxing is not the cup of tea for many. While a number of combat sports icons have steered away from getting into the squared circle against the celebrity boxer, who is 4-0 as a pro, is coming off of a split decision victory against former UFC welterweight champion Tyron Woodley and will be facing Tommy Fury, the younger brother of WBC heavyweight champion of the world Tyson Fury, on 18th December in Miami. 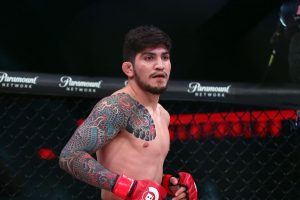 But who after Tommy Fury? Dillon Danis is willing to be the subsequent fighter to face ‘The Problem Child’ inside the squared circle, who has had a history of verbal tussles with Jake in the past.

“He’s is just a scumbag… No one likes him,” said Danis while making an appearance on the latest episode of PlanBri Uncut podcast, while adding that he is eager to box Jake in the future.

‘El Jefe’ also recently claimed that Woodley, who suffered a split decision loss to Jake on 29th August at the Rocket Mortgage FieldHouse in Cleveland, was not allowed to knock his opponent out as per the contract.

“Tyron Woodley, from what I heard, had it in the contract that he was not allowed to knock out Jake Paul,” said Danis, “I swear on anything he was against the ropes, I swear, that’s why when Jake Paul was against the ropes, Tyron Woodley didn’t hit him.” I’m telling you right now. It was in his contract where it said you’re not allowed to knock him out,” Danis said on The MMA Hour last week. [H/T GiveMeSport]

Danis, who is 2-0 in his pro MMA career, has been out of action since facing Max Humphrey at Bellator 222, and his rise to fame has been credited to his close association with his teammate Conor McGregor and his brawl against Khabib Nurmagomedov at UFC 229.

Do you want to see a boxing match between Jake Paul and Dillon Danis? Let us know in the comments.