The Disputed Origin Story of the UFC Octagon (Video)

We all know that Ultimate Fighting Championship hosted its first event on November 12, 1993 in Denver, Colorado. But not a lot of people know about what it took to bring the UFC to life and make it such a successful sports property and its journey from being sold for 2 million dollars to being valued at 4.2 billion dollars in 2017. 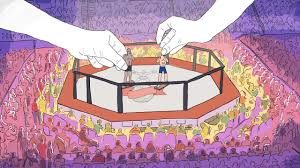 For the 25th year of the Ultimate Fighting Championship, UFC has brought a series of short films presenting 25 captivating UFC stories, one for each year of existence.

The first one of the series talks about the conception of the Octagon as we know it. The eight sided legendary structure is synonymous with the UFC but do we really know whose idea was the Octagon. A lot of people claim to be the one who conceptualized the eight sided cage. UFC has captured all of their opinions in this animated short film while they make a case for them being the creator.