UFC News: Dominick Cruz hints that he may hit Cejudo with a Masvidal-esque flying knee! 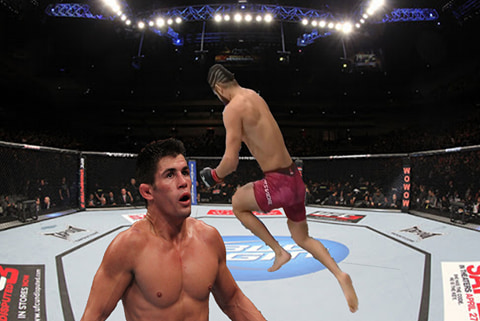 ‘The Dominator’ will make his much anticipated return after almost three and a half years. Fighting a champion like Cejudo after a long hiatus can be difficult. However having famously said, “There’s no such thing such as ring rust”, Cruz plans to out grind the ‘Triple C’. 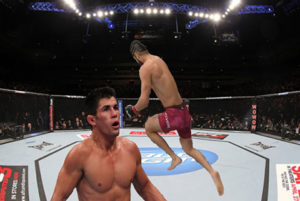 Speaking in an interview, Cruz claimed that he’s planning to give Cejudo a taste of his own medicine. Cruz being of wrestling background as well, will look forward to grab a hold of Cejudo despite his Olympic credentials. (via YouTube):

I’m long and lanky. Also, I can wrestle, I have a wrestling background. So where Henry Cejudo knows how to grind, I know how to grind. Instead of getting tired and pulling back, I grind with him,” said Cruz while breaking his tactics down.

Blessings from the ‘Street Jesus’?

Cruz is famously known for using his creative footwork which leads to his opponents missing most of his shots. The only critique of his career being him not finishing fights. His last finish over Takeya Mizugaki being over six years. Cruz however will look to wipe that of as he plans to finish Cejudo. He intends to do it through path of least resistance, that is, as quick as possible. That being said, Cruz wishes to finish Cejudo just like the fastest knockout in the UFC. The infamous flying knee knockout by BMF champ Jorge Masvidal of Ben Askren.

“I’m going for the finish. Every single one of us wants to walk in there and do what Masvidal did [to Askren]. If we could fight every fight like that, it would be that way. But does it happen? No. It’s either a blowout or right up to the last second.

If I can go in there and not have you lay a finger on me, that’s what I’ll do. I don’t want you to touch me,” said Dominick Cruz as he explains his desire to finish the fight with minimal damage.”

Bouncing back from injuries has been a hallmark of Cruz’ career. He did the same against T.J. Dillashaw back in 2016 to regain his title. He vows to do the same this time around as well.