The fight between Diaz and Pettis will take place at the welterweight limit. Pettis made his Welterweight debut in March where he scored a spectacular knockout victory over former welterweight title challenger Stephen Thompson. Pettis has added the additional weight really well and his coach Duke Roufus he will revert back to old school game planning for the Diaz fight. 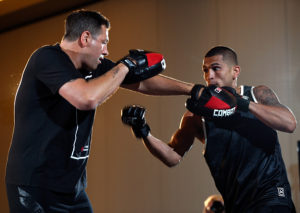 “I think it’s great for both guys,” Roufus said recently on The MMA Hour. “I’m being a little goofy with my metaphors, et cetera, but Nate Diaz is a beast, and he’s going to be a beast at 170. But I’ve found Anthony is really strong [at 170]. One thing I know from being a coach in this sport, I see these guys have incredible performances in the gym at their normal weight, and that’s what I’m trying to get a lot of my guys to dial into, being at the weight that they perform the best at in the gym. So that being said, it’s going to be a great fight. Stylistically, Nate is an incredible boxer, tough as nails, resilient, got the heart of a champion and incredible jiu-jitsu.

“I just think Anthony brings more tools to the fight. Ironically, a lot of people don’t realize, one of my longtime students … was the coach of Josh Thomson, who helped manufacture that win over Nate Diaz. So that goes back to old-school Roufus gameplan.” (H/T – MMA FIGHTING)

This will also be the much-awaited return of Nate Diaz who has been out of the Octagon for nearly three-years ever since his decision loss to Conor McGregor at UFC 202 back in August of 2016.