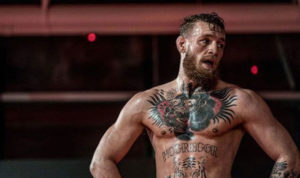 Following his loss, Poirier wasn’t sure about his fighting career, but soon sent out a tweet stating that he wants to fight Conor McGregor next and it doesn’t matter if it’s in Boxing or MMA. The pair previously met at UFC 178 back in 2014 where the Irishmen knocked him out in the first round.

“I think me and Conor running it back makes a lot of sense at this point,” Poirier wrote on Twitter.

In MMA or Zuffa Boxing https://t.co/9WOo8yJBTy

This resulted in an immediate reply from Conor McGregor who said that he knocked him[Poirier] out in 90 seconds the last time they fought and that Poirier should have taken his name with a bit more respect.

Previous articleDustin Poirier warns Colby Covington that ‘it’s on’ when they cross paths next
Next articleWatch: Justin Gaethje says he will be waiting for ‘Irish f**k’ Conor McGregor if he returns