The fireworks will surely fly when highly rated UFC lightweights Dustin Poirier and Justin Gaethje will go head-to-head inside the octagon. Poirier has been putting in some really strong performances and will be looking to continue his dominant run. While he is usually a man of a few words, he recently had plenty to say about his upcoming opponent. While talking about Gaethje, Poirier claimed that he will have a short career. 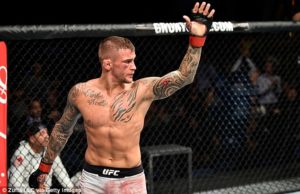 Poirier recently gave an interview to MMA Fighting. He talked about Gaethje having a dangerous style and also revealed that Eddie Alvarez has been ducking from a rematch against him.

Justin is a fighter’s fighter, people like to watch him fight. He’s a little bit of a brute. He out-toughs guys and you know that he’s a guy who doesn’t break mentally. You have to break his body. You have to short-circuit him. You have to make his body stop working. He has a never-die attitude and I respect that about him, and I know what he’s bringing to the table. I know how dangerous he is, the power he brings and the grit he brings to the fight.

I’m not looking to go out there and get damaged and have a bloodbath, but I’m a fighter deep down inside. So no matter how much I try to tame that beast, when the going gets tough, it comes out. I’m glad I have that because it’s gotten me far.

I’m not really chasing rematches. I’m chasing gold. And whatever fight can get me closer to being a world champion, those are the fights that I want. Of course I wanted the Eddie rematch, just because of the way it ended and he was still ranked No. 3 at the time, so I was like I need to get that fight back. He was the only guy without a fight as well in the top five when I was trying to push for the fight, and it just made sense. I knew if I beat him, I would be really close to a world title.