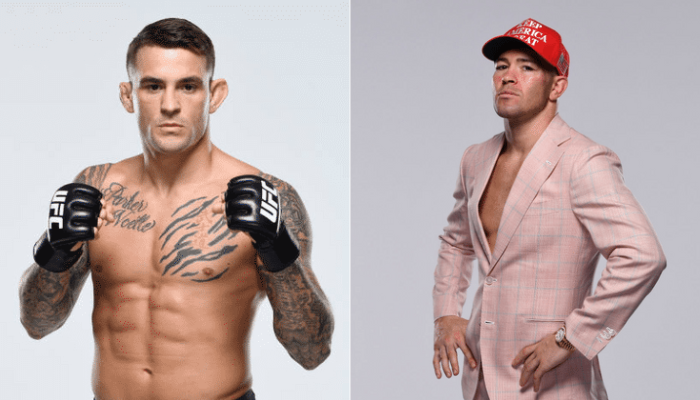 UFC lightweight fighter Dustin Poirier has reacted to his leaked sparring footage which was released by Colby Covington.

In the video posted by Colby Covington, Dustin Poirier is seen sparring with a young fighter and during their sparring, Dustin drops him with a strong right hand and his partner goes down in pain and sits. Dustin is then seen screaming ‘And New’ while marching around in the ring. According to Colby, during this sparring session, Dustin was preparing for his fight against then UFC lightweight champion Khabib Nurmagomedov.

The guy wearing full nerf gear head to toe to protect his face and his feelings is Poirier. The guy with no headgear, wrestling credentials or brain cells left is “khabib.” @DustinPoirier Good guy? Bad guy? You be the judge👨‍⚖️ #AndNew #UFC264 pic.twitter.com/EMMFwC2b4E

“The guy wearing full nerf gear head to toe to protect his face and his feelings is Poirier. The guy with no headgear, wrestling credentials or brain cells left is “khabib.” @DustinPoirier Good guy? Bad guy? You be the judge #AndNew #UFC264″

Colby used to train at American Top Team alongside Dustin Poirier and his former best friend Jorge Masvidal. In an interview, Colby narrated the entire incident.

“Dustin (Poirier) is not a nice, charitable guy,” Covington said to MMAJunkie (via LowKick MMA). “He is a piece of sh*t person — let me show you this video, Mike, so you can see it off-camera, I can’t show it on camera, look at this, look at this fight, this was at training. Wait, this is an amateur, by the way, no headgear, he was going training with him, watch. Watch what he says in his face, ‘And New’ — he’s rubbing it in the kid’s face after he drops him. What’s nice and honorable, and charitable about that?

“You just dropped an amateur who came to help you train for Khabib (Nurmagomedov) which — why are you training with amateurs when you’re preparing for Khabib as it is?” Covington continued. “You have the best wrestler, the best cardio freak in the gym as there is at the gym at the time, but you chose to train with amateurs and you’re supposed to be this good guy but you’re not and you’re knocking out amateurs, and you’re yelling in their face, ‘And New’. That’s not Khabib kid, you didn’t just knock out Khabib. So Dustin’s a prick. Dustin’s a piece of sh*t, and I’m sick of this, ‘nice guy’ act.“

After Colby Covington released the sparring footage, lots of questions are being raised over Dustin Poirier. Many people are stating that the sparring incident was totally wrong and Dustin should not have done that to an amateur fighter who was just trying to help him with his fighting camp.

“This is a pro fighter with 20 wins,” Poirier wrote.

Dustin Poirier didn’t give any long explanation for it he just revealed that the guy wasn’t an amateur fighter instead it was a Pro MMA fighter with more than 20 wins. Dustin doesn’t want to engage in any kind of extra controversy as he is focused on his upcoming trilogy fight against Conor Mcgregor at UFC 264 which takes place on July 10.