UFC: Dustin Poirier wants to win the Title just to tell his wife, ‘I did it” 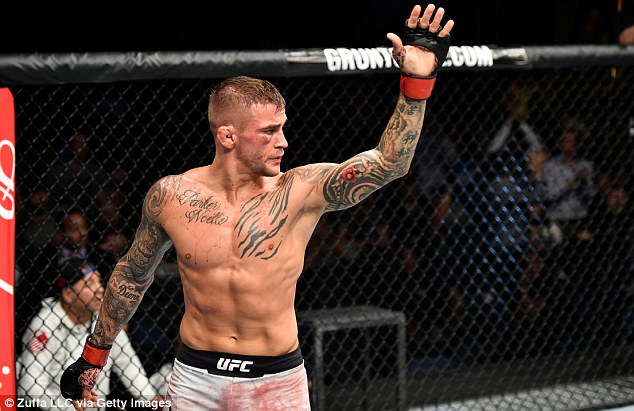 UFC on Fox 29 is now in the books. It was a highly entertaining event and a huge part of the credit for that goes to the main-event. Exciting lightweights Dustin Poirier and Justin Gaethje went to war with each other. In the end, Poirier won the battle via TKO in the fourth round. During the post-fight presser, Poirier talked about his family and revealed that he wants to win UFC gold and the struggles he and his wife faced before getting success.

Here’s what Poirier had to say:

I’m taking her (his daughter) to the zoo Monday. I’m so excited I love her so much. She is almost two, so now she knows what’s going on. This last time, dropping her off and my wife at the airport was really tough. You know, she has never like turned around and cried, wondered where I’m going. So I miss her man and I can’t wait to see her.

I used to fight for myself and now I fight for my family. So it’s just a whole different world now.

She knows how to say ‘bobo’ now. So she will be tossing that word around a lot ‘bobo’ ‘bobo’. But I will wear this (scars and injuries) proudly man. Win, lose or draw, I put everything into my training camps. I push myself mentally, physically everyday to be the best and I stopped listening to critics a couple of fights ago. Stopped caring about what people think. I’m just, you know. This is just what I do, you know.

I want to fight for gold man. I’m not chasing rematches with Conor (McGregor), rematches with Eddie (Alvarez), rematches with anybody. That is not my goal to get even with these guys. My goal is to prosper and be a world champion and make money and retire and say, “I did it”.

I just want to go to sleep with that belt around my waist one night and tell my wife, “I did it”. You know years and years ago, like in 2006, my wife was, I didn’t have a car. She would drive me to the weigh-ins. We would sleep in broken down motels and I would fight the next day. Just me and her and I just want to say that, “I did it, man”.