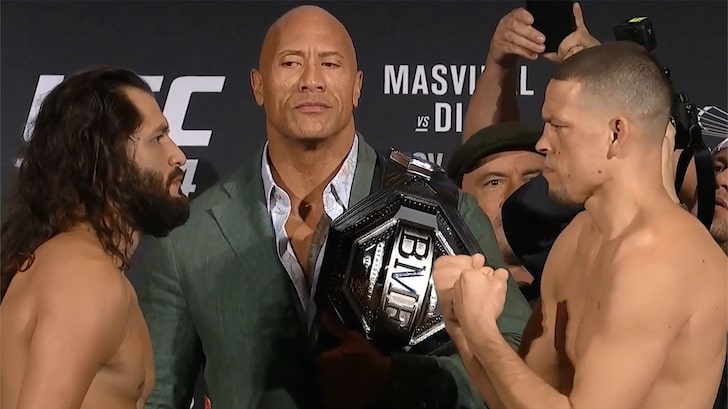 The fight was one of the biggest of the year and was for the BMF title. Dwayne ‘The Rock’ Johnson was also present at the event and he wrapped the belt around Jorge Masvidal. 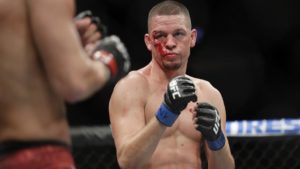 Nate Diaz was upset with the stoppage as he said that he was clear to fight for the remainder of the rounds, but he was more visibly irked when even The Rock was siding with Masvidal.

Even @TheRock has to respect @NateDiaz209 on the 🎤 (via @arielhelwani h/t @espnmma) pic.twitter.com/wcIiu6kdAO

At the post-fight press conference, Nate Diaz said: “he [The Rock] can get it too“.

“F**k The Rock too man. That motherf**ker over here playing me. I see him all over smiling with Masvidal. Should have had Mike Tyson hand out the belt if anybody. I don’t give a f**k about any belt anyway but he can get it too. He on the wrong side. F**k him. I’m on the west coast. Mike Tyson should have been here anyway, he is the Baddest Man on the Planet right,”

“You guys caught me at the wrong time, The Rock’s cool. I like Ballers (The Rock’s comedy sitcom about American Football). But he picked the wrong side,” Diaz said. (H/T – MMA India)

Dwayne ‘The Rock’ Johnson was recently made an appearance on Ariel Helwani’s MMA Show, where he said that Diaz’ comments bothered didn’t him and even expected it.

“I wasn’t surprised at Nate’s comments because that’s the Nate that we all know and love,” Johnson said (via MMA News). “He is as advertised. Nate, he gets it. He knows that me and Jorge we’re boys, we’re from Miami. We have a lot of deep connections down there. A lot of the fighters we know, a lot of the coaches and trainers that we know, a lot of the gyms that we’ve been to down there. So there’s a connection, so no I was totally fine with it. He gets it.”

“Again I went into the fight, I wanted to be as neutral as possible when I was promoting it because as we’re leading up to it and selling it on pay-per-view I didn’t want to come out and say, ‘Jorge’s my boy and he’s gonna win,’” he said. “No, I just wanted to be neutral and I thought that was the best, smartest, strategic play to get as many new eyes on this fight as possible and again help impact in my own little way the bottom line. From what I’m told, since UFC’s transition it was the biggest fight they’ve ever had, second I’m sorry, to Conor and Khabib which is quite an amazing accomplishment. I’m very proud for both those guys.”