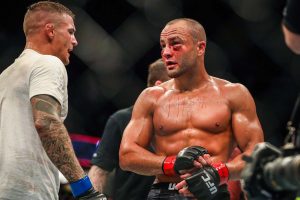 Eddie Alvarez is set to fight in April at ONE Championship against former title challenger Iuri Lapicus. While Eddie Alvarez already has a fight set, he said in an interview with Brain Campbell of The Morning Combat that he can defeat the Dagestani star and take his zero.

“Tibau had a great, solid gameplan, and he arguably won that fight. He was able to match Khabib’s strengths, he was able to throw good, straight shots, and he was able to negate a lot of Khabib’s wrestling,” Eddie Alvarez continued. “That’s what I’m able to do against virtually every opponent I’ve fought. Styles make matchup, and anybody who’s in this sport at a high level knows that. I just think that matchup in general would have been something special.”

Do you guys agree with Eddie Alvarez? Let us know in the comments section below.