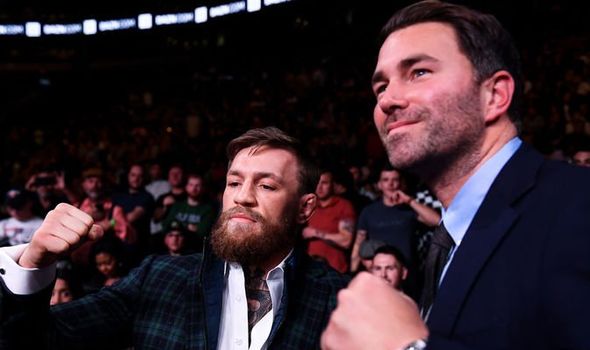 Eddie Hearn is without a doubt one of the most influential Boxing promoters in the world today. He promotes former heavyweight champion of the world Anthony Joshua and made him a global star. He has promoted some of Britain’s biggest boxing stars like Carl Froch, Tony Bellew and currently, he is also promoting former undisputed cruiserweight champion Oleksandr Usyk and former middleweight champion Gennady Golovkin. 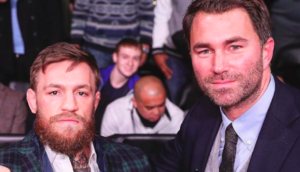 His Boxing shows are a sell-out everywhere, be it an indoor Arena or a 90,000 capacity Wembley stadium. Despite being loaded with so many high profile fighters, he is in awe with former UFC featherweight and lightweight champion Conor McGregor. In a recent interview with Jamal Niaz of Seconds Now, Eddie Hearn spoke very highly of the Irish star.

“I don’t know what’s happening with his career or fights,” Hearn said of McGregor. “I’m not really up to speed on the MMA and UFC side. But I do know, he’ll always be probably the biggest draw in UFC.”

He was asked if he would like to be like to ever promote Conor McGregor if he plans to return to the ring.

“I’d like to think so, but he’s got a big enough brand, it’s almost like does he really need me?”

“It’s a bit like Gennady Golovkin with us representing,” he said. “He can do it himself, but we can do it better with him. Not for him, with him,” he said.

“It’s very much once they get to those kinds of levels of partnership, where you say to someone ‘Conor look, we know you’re the boss, you’re the brand, but behind the scenes in terms of revenue, in terms of PR, in terms of profile, in terms of logistics, and of general management of your show to make your life easier, we’re as slick as they come. And that’s where the relationships come in with Gennady as well. And when you get those kinds of things it’s a big honour because those guys can go for anyone..and that’s big for us.”

Eddie Hearn met Conor McGregor before at the TD Garden Arena in Boston when the former champion showed up to support fellow Irish Katie Taylor.

“I’ve never met him before so,” he recounted. “So he’s walking down the corridors of the fight. He’s got this massive aura, massive aura! So I was (actually) a bit in awe, you know. I just said ‘crikey can I have a photo mate?”

“[He said] Hey Eddie how’re you doing?’ and I thought ‘fuck well, you know me?’ It was great to have him there.”