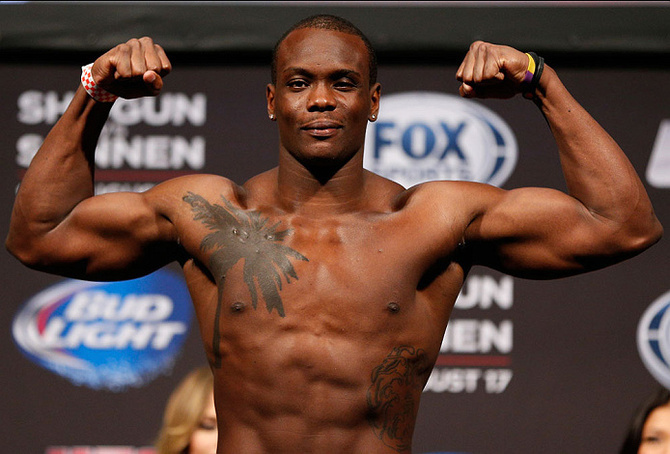 UFC Singapore will once again cast the spotlight on the light heavyweight division, which is
going through a transition yet again. With Cormier contesting for the heavyweight title, and a
number of 185’ers harbouring thoughts of moving up a weight class, the next couple of
months could be interesting in the UFC.

One of the major attractions on the Singapore card is the light heavyweight showdown
between Ovince Saint Preux and Tyson Pedro. Saint Preux lost his last fight against Latifi,
after building a head of steam with three back – to – back wins. OSP is known for his
unorthodox striking, and his penchant for finishing fights with the Von Flue choke.

We caught up with OSP recently, to talk about his upcoming fight, and various other topics.

What he thought went wrong during his fight with Latifi
It was just me subconsciously not pulling the trigger, that’s about it. But other than that,
every fight is an experience, and I learned a lot from that fight. So that’s basically it – me not
pulling the trigger when I needed to.

If Pedro was the first fight offered to him
I just got a call. I got a call saying, “Do you want to fight Pedro? Would that be a good fight?”
And I was like, “He’s an up – and – comer, that’s a good fight He’s got a lot of talent”, and we
just thought it was a good fight.

If he has seen Pedro’s fights, and knows what he can expect from him
Not necessarily. We have to assess our games first as fighters. Pedro is definitely a pretty
good striker. I think his striking is pretty good. But I’ll also say at the same time that his last
fight was a couple of months ago. Me, personally, after every fight, I think my style changes
a little bit, so the Pedro we saw the last time, is not the Pedro I’ll end up fighting during the
fight. So, game plans can be implemented during the fight, but at the end of the day, I’m
going to face the best version of Pedro.

How much time he’s spending in Knoxville, and how much time he plans to spend in
Asia for his camp
To be honest, 80 percent of my training camp is in Knoxville, so I guess the other 10 to 20
percent… my wrestling coach stays in California. I get to go out there, and find the time to
train with him. So usually, before a training camp, he comes out here (to Knoxville) or I go
out there for about a week and a half to train with him. Probably three to four times a week
and during the weekends, I take a two and a half hour drive to Atlanta to meet my wrestling
coach.

My wrestling coach, Coach Manu down in Atlanta, so I got all the help (I need). I left here
pretty much as the guy that took everything together, the guy that put together what they
gave me – my game plan, what strategies we’re going to use, what to look out for,
breakdown my stance and stuff with my head coach Eric Turner. So I’m pretty much down
here in Knoxville, and when I’m down here in Knoxville, I’m sharing all I know, and that’s it.
I’m sharing my techniques; I know how to spar, I know how to fight. And I’m perfectly drilled,
and drilling becomes a habit, and habits become reflexes.

So a lot of times, fighters go out there and fight, and they don’t remember what happened
because they’ve been doing this for so long, it becomes second nature. So that’s what I
usually do, I work on my instincts. I work on my habits, and that’s what makes me a good
fighter.

What he can do to do what he did not do during the Latifi fight, and pull the trigger
It’s not so much that I couldn’t flip the switch. When you’re so used to fighting and making it
a habit, you tune your body to do this, to do this, and to do this. It’s something when you put
yourself in situations where, let’s say there’s an outside distraction that’s going on, and when
that outside distraction is going on, subconsciously, in your head, you’re saying
subconsciously that you’ve been put in a situation in the fight you don’t want to (be in). It
puts your timing and everything off that mark.

That’s what I was talking about, when I said I couldn’t pull the trigger when I wanted to. I
mean, had the fight went on, I would’ve gotten a lot better.

Where he thinks a victory over Pedro would put him in the rankings
It’s just one more fight in my life. What people don’t realize is, it’s just one of those things
were, you put me in a fight that makes sense. At the end of the day, it can put me in a
situation where my ranking might not even change. That doesn’t matter to me at all. The
biggest thing what matters to me right now is to rack up some wins, and the more wins I rack
up, it will put me in that situation where people will start talking about me.

When it puts you in a situation where people talk about you, it will put you in that category
where (you say), “Okay, I’ll fight the top five guys and beat those top five guys, and I can
fight for the belt”. That’s what I’m shooting for right now.

What he expects from UFC Singapore
I expect a big crowd. Cerrone is a big draw, and I’ve heard I’m a big draw too, so I’m
expecting to put on a good show. It’s just, the Asian market is growing, and I’m expecting to
leave with more fans than before, and putting on fights in the Asian market, I love it. I
absolutely love it. I had a great experience in Japan, and I think I’m going to have an
amazing experience in Singapore. If I get another opportunity to hit another market, I’m
going to do it again.

Previous articleBellator: Roy Nelson wants revenge versus Matt Mitrione; Fedor is his ‘dream fight’
Next articleUFC Fight Night 130: Thompson vs. Till – Fights to Watch For