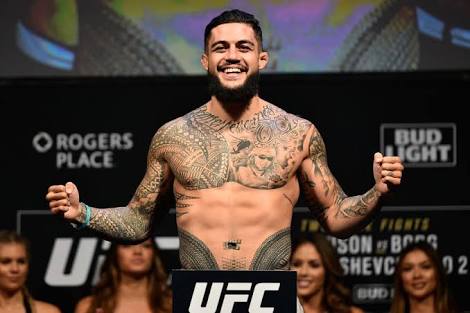 UFC returns to Singapore next month with UFC Fight Night 132, headlined by ‘Cowboy’ Donald Cerrone and Leon Edwards, in what is surely going to be a blockbuster welterweight encounter. The co – main event will see two exciting light heavyweights duking it out, with Tyson Pedro looking to climb the rankings, as he faces the unorthodox Ovince Saint Preux.

But before both the light heavyweights collide, we had the opportunity to catch up with Tyson Pedro, as he talked about his upcoming fight, what he thought about DC moving to the heavyweight division, and a host of other topics.

Yeah, massive. To be really honest, he was a big influence for me getting into martial arts, but to actually fight professionally was actually my idea. The money in MMA wasn’t as good when he was coming through the ranks, but now I’m at the biggest stage, and he couldn’t be more proud of me.

About his journey since breaking his leg four years ago

Oh yeah, it was a life changing experience, undergoing an injury like that four years ago, and to fight and be where I am. So, I’m very thankful that I’m able to train as much as I am, and still be able to fight. There’s some restrictions from that (injury), but I’m glad I’m able to walk down and do this, and become a lot bigger than you’d think (then). I don’t know, it’s been four years. And now I’m fighting on the biggest stage in the world, and I’m fighting a top ten ranked opponent.

OSP being unorthodox in striking

OSP is one of those guys who you don’t want to get near to, to be fair, like most of the guys in the light heavyweight division. It only takes one hit to put someone away. Like everyone, I’m working on lots of movement, working on not getting hit, trying to offer more volume in how much I’m striking. So, like I said, you have to stay away from his hand and try to not get hit.

The reason I was working on it, was because it was a weakness in my game, as I have a habit of picking one or individual strikes, so that was it. I was trying to improve my game. Also, it’s not just OSP, but the light heavyweights in general. You’re not seeing a lot of movement and striking as the other (divisions). I think it is something I can be good at; it’s not up there in the heavier divisions, but that’s why I’ve been working on it.

Where he is training out of for this fight

Before, it was at JacksonWink and BMF Ranch with Donald Cerrone, and it was an awesome experience.

I’m not training out of any camp in Asia, not at the moment. But I believe I will be at Tiger Muay Thai in Thailand (training for the fight), before heading to Singapore, to get used to the climate.

Thoughts on the 205 division

You know, I’m not looking past the fight, or the light heavyweight division in general. The places are for the taking, and I think I will be fighting for the title soon. I have no idea (about the spots), because I think the top five guys train together. I think it’s interesting.

I get the feeling that if DC gets the (heavyweight) title, he won’t be coming back to the light heavyweight division. So it’ll be very open for the rest of us.

I do a little bit of gaming. Also, this week for example during the Fashion Week, I’m doing some work with IMG. I’ve also gone on to do some fashion shows, which I’ve done in my life. Maybe also do The Halfcast Podcast (which he does with his brother in law and UFC heavyweight Tai Tuivasa). I’m also setting up my Twitch gaming account online; especially after hanging out with ‘Cowboy’, riding bikes with me, maybe rock climbing… I try to do as much as I can.

What he thinks will happen

I’m thinking only about the finish. I’m going for it!