UFC Moscow, the premier event for UFC in Russia had its main event announced less than a day ago. Fabricio Werdum vs Alexey Oleynik WAS all set to headline UFC’s entry into Russia, until tonight’s breaking news.

News broke out less than a hour ago – that former UFC HW Champion, Fabricio Werdum has failed an USADA out of competition drug test. 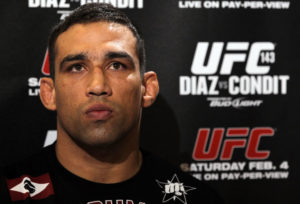 Fabricio Werdum has been competing since 2002 and this is the first time he has been notified of potential drug use. Social media members were the first to report the issue.

Former UFC heavyweight champion Fabricio Werdum has been notified of a potential anti-doping violation by USADA, stemming from an out-of-competition sample collected on April 25.

Fabricio Werdum has been notified of a potential doping violation by USADA from an out of competition drug test on April 25. Obviously that puts his Sept. fight against Alexey Oleynik in doubt. https://t.co/f4PgRsyuWD pic.twitter.com/7xsq0IYlJE

Details are yet to be announced regarding the particular drug in question, but this is a major set back for UFC: Russia and the Werdum’s camp.

“The entire UFC staff and I are all working together to solve this problem,” Abdel-Aziz said.

“I’m very confident it will be OK. … It’s a misunderstanding. Something is off. Fabricio did not take anything illegal.”

More information to be revealed as the story progresses.

Previous article
MMA: Paul Daley has made peace with Bellator MMA, has a meeting set-up with Scott Coker for this weekend
Next article
UFC: Stephen Thompson slams UFC politics and fake belts