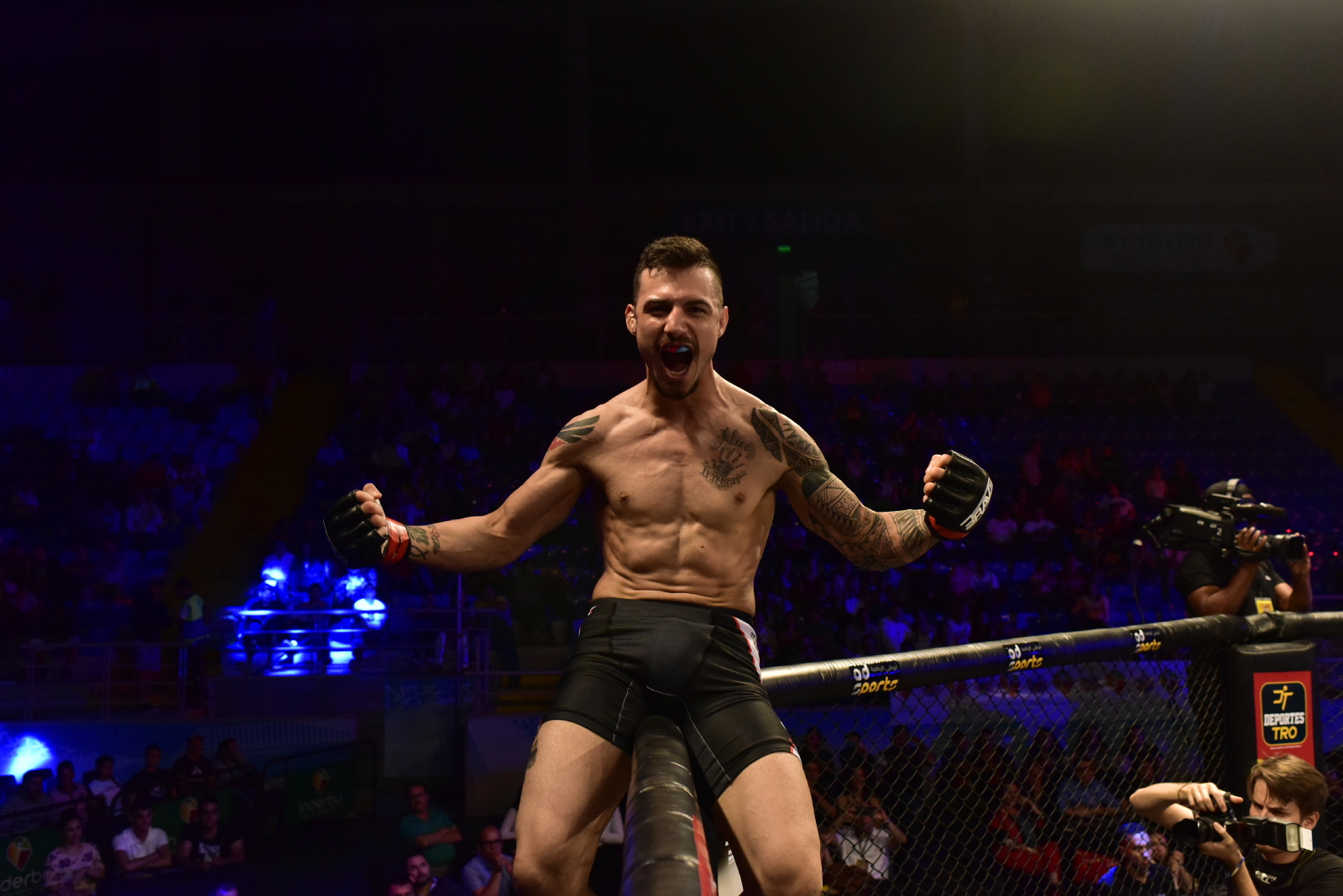 Alice and Caio have little to no idea of what their father does for a living. They only know Gabriel Miranda, their loving and caring daddy.

BRAVE CF Featherweight contender Gabriel “Fly” is a whole different animal from the family man. One of the promotion’s best submission artists, he’s known for his flying submissions and ever-improving stand-up game. And he will put that reputation on the line at a heavier weight as he is set to face Jon Zarate in a feature Lightweight bout at BRAVE 26, in Bogota, Colombia, on September 7th, in a special

A black belt in jiu-jitsu and a teacher of the gentle art, Gabriel is on a path to destruction. He wants to take over the Featherweight division and is not shy about putting out his intentions on social media, with continued call-outs of the current world champion Bubba Jenkins.

Before any of that can come to fruition, however, he has to go past one of the organization’s bad boys in Jon Zarate. His opponent’s personality is a stark contrast of his own, as “Fly” is known as a calm and friendly person and a gentleman. He focuses on submissions but is not afraid to get his hands dirty.

However, Gabriel constantly deals with two sides to his own persona. He’s a family-oriented person first, a fighter second. But he can’t forget his aggressiveness, and will to fight. It’s always in the back of his mind, even when he’s out with the kids on the many parks of his adopted home of Curitiba.

He unleashes part of that during training at the world-famous CM System, where he locks horns with giants of MMA, such as current BRAVE Lightweight world champion Luan “Miau” Santiago and Welterweight contender Geraldo Neto, as well as the leader of the team, the legendary Cristiano Marcello, his mentor. 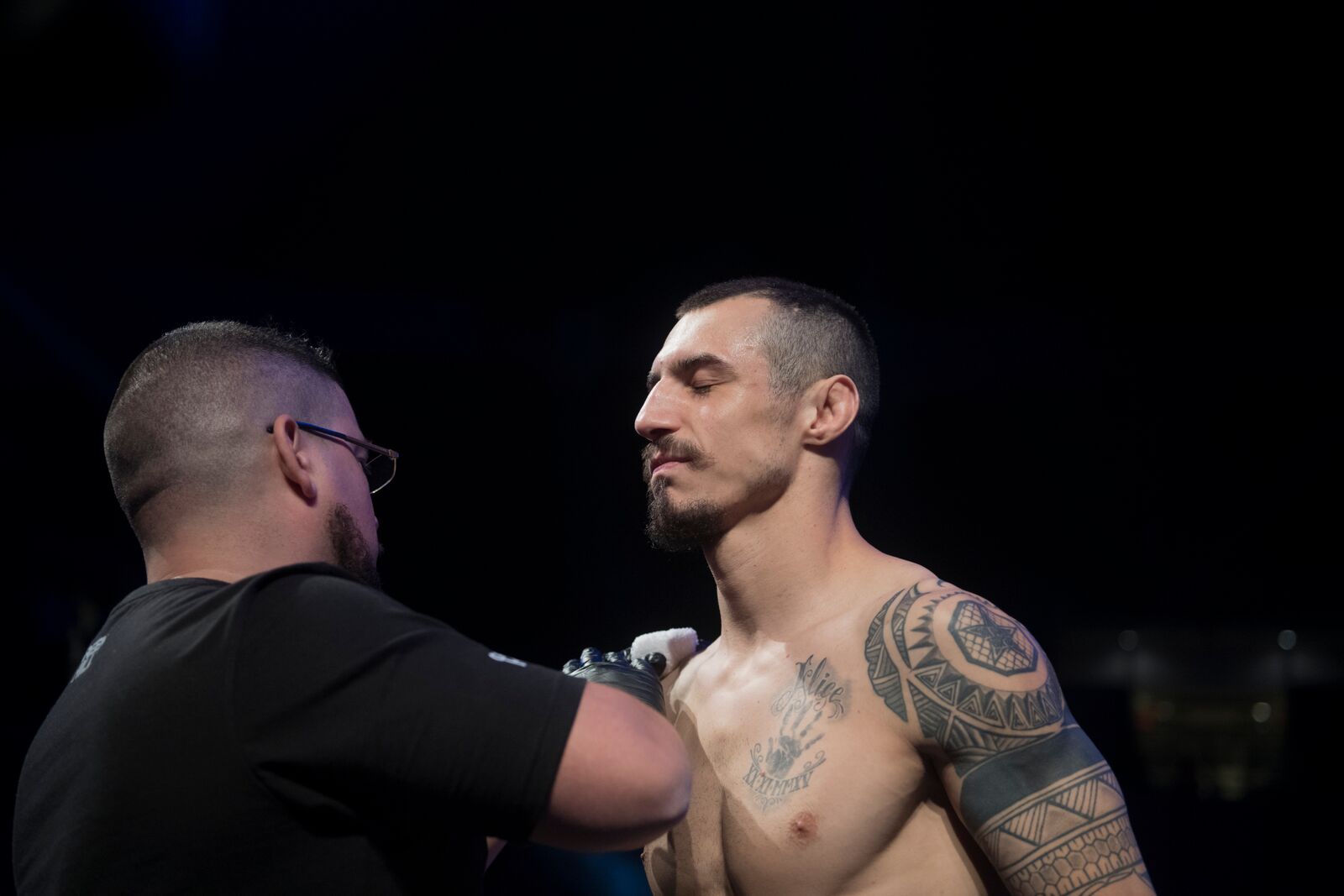 But few people know him at his most aggressive. Fernando Noriega is one of them. The Peruvian fighter faced off against “Fly” back in September of last year, when BRAVE Combat Federation went to Colombia for the first time.

Gabriel screamed and screamed in the backstage, hyping himself up for the biggest moment of his career to date: his BRAVE CF debut. During the fight, it was business as usual. He controlled his own nerves, quickly locking in a guillotine choke that made his opponent tap.

Instead of attending the after-party, he went straight back to his hotel room to call his kids and wife. The fighter was back to being the family man.

His next BRAVE CF fight was a monumental challenge. Too much, too soon for Gabriel. Akhmed Magomedov was able to fend off all of his submission attempts in their BRAVE 21 fight and walked away with a unanimous decision victory.

“Fly” wasn’t discouraged. He took the loss as a lesson and has worked on improving his wrestling under Marcelo Zulu, a former Brazil National Team member in wrestling.

Gabriel hasn’t fought since the end of December and has used his time to enjoy Alice and Caio, as well as teaching jiu-jitsu and being a sparring partner for his teammates. As soon as his comeback fight was signed, however, a key was turned. He’s no longer just the family man and supportive teammate. He’s a man on a path to destruction.

His next stop will be in Bogota, Colombia, as he will look to bounce back to winning ways at BRAVE 26. He will stop at nothing to reach Bubba Jenkins, who has been repeatedly warned there can be a new sheriff in Featherweight Town.

Can he eventually snatch the belt and crown from Jenkins? BRAVE 26 will give the fans an idea of how close Gabriel is to achieving that. Win or lose, we know what “Fly” will do after BRAVE 26. A call to his family and friends.

Previous articleMMA: Punch victim calls Conor McGregor a ‘bully with money’
Next articleWATCH: Conor McGregor opens up about his MMA return and apologises for attacking the old man in an Irish pub