Fan who entered UFC 229 cage during melee gets banned; posts a long letter in explanation 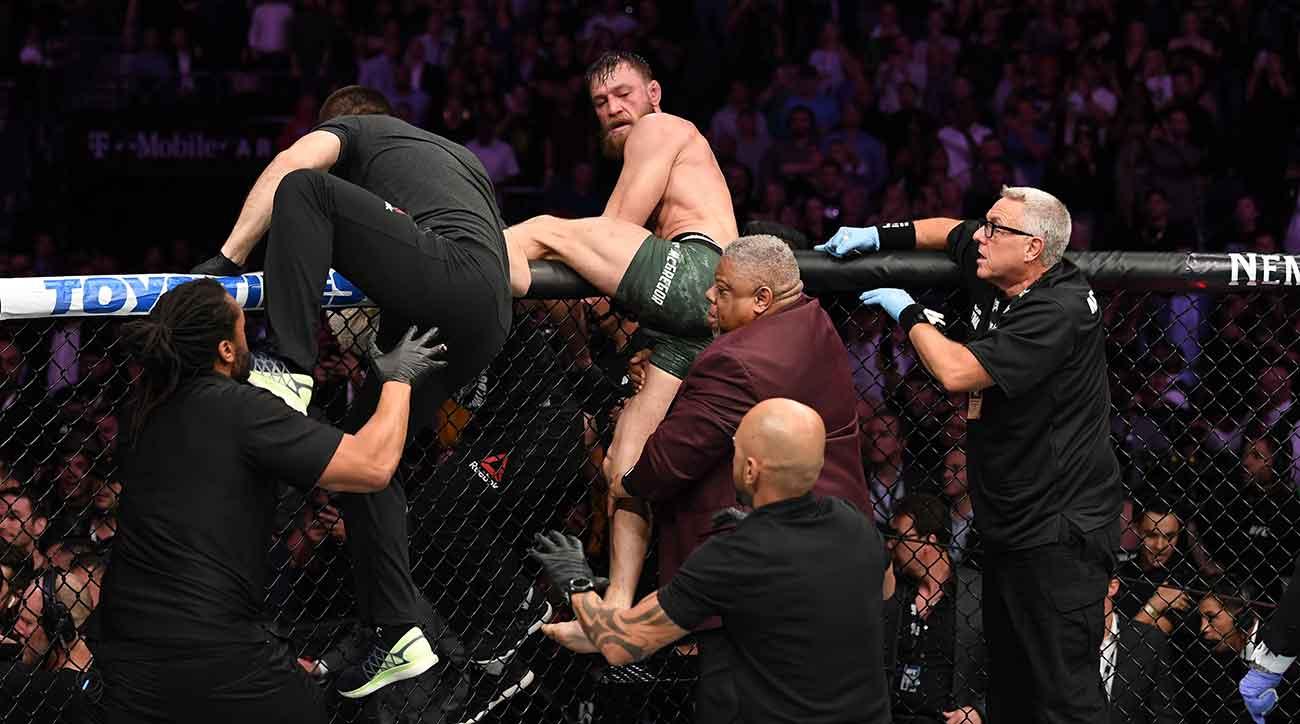 An Irish MMA fan named David Martin had been banned from entering UFC’s further events in future.The ban came from the UFC as Martin entered the UFC 229 octagon after the main event fight between Conor and Khabib where the post fight brawl was taking place with Conor and Khabib’s teammates hitting each other.

Martin just recently got a letter from the UFC stating that he won’t be able to attend any further events as his actions jeoparadized the safety of the athletes and the other event attendees and that irrespective of his intentions he has violated both the UFC and Arena protocols and procedures.

Martin was however dissatisfied with this ban and wrote a lengthy response to Hunter Campbell,the UFC’s chief Legal Officer in which he said whatever he did was to help his idol Mcgregor who he felt was in a life threatening situation and it was his priority being an Irish to protect him.

Martin made his statement to a media outlet.Below is his full response to the ban imposed by the UFC on him.

“This evening (Dec 6th at 4:42pm PST) I received a “NOTICE of Action by Zuffa, LLC dba UFC” by email from UFC’s Chief Legal Officer and Executive VP, banning me from future UFC events for entering the Octagon on October 6th. The following is that letter and my official response to the UFC.

Dear Mr. Campbell, On Saturday, Oct 6th in the T Mobile Arena in Las Vegas NV, I witnessed an individual (Conor McGregor) being “stormed” and assaulted after the UFC 229 main event had officially ended. Simultaneously I witnessed the lapse in security to prevent or properly address the “storm” followed by the assault in a timely or an appropriate manner. I understood the majority of security were involved in an alternate incident outside the cage. It was my perception and understanding that the individual (Conor McGregor) was in a life threating situation and was left defenseless after being likely exhausted from his fight. Irrespective of what was legal or not, my actions and priorities were to protect that individual (Conor McGregor) from harm and possible death and therefore I positioned myself appropriately, as any Irish man in my seat would have likely done.

With that said, I fully understand it is absolutely unacceptable for persons not directly involved with the event to enter the Octagon. The last thing we want to incite or trigger is a riot, with members of the public storming the Octagon. This is why I jumped onto Daniel Cormier’s back and held him with all my strength and pleaded with him not to enter the Octagon. You see, Daniel was extremely upset with what was transpiring on the other side of the Octagon, something he admitted in a post-event interview. I was screaming at Daniel, in his ear, as I was wrapped around him. The last thing I wanted was an upset heavyweight involved in a brawl. Thankfully Daniel agreed to calm down and not enter.

I am certain once you review the footage from the aftermath, which has not been made public, you will also see and hear me prevent Khabib from returning to the Octagon by holding the door and rejecting the requests from security to let him return. You should also hear me ask Daniel Cormier (who had since entered the Octagon himself) to ensure Khabib is pinned and doesn’t move as security was still failing at this point and Khabib was saying he wanted to attack Conor McGregor.

In that unreleased footage, you will also see me holding Conor McGregor and hear me speaking to him asking him to breathe and stay where he is with me.

Once it was clear things were in control and Conor McGregor was not at risk of being violently assaulted by thugs, I exited the Octagon and returned to my seat.

While I wholeheartedly respect and support the imperative requirement that nobody should under any circumstances enter the Octagon, I do firmly believe my actions the night of October 6th, in the T-Mobile Las Vegas arena, were of a unique circumstance, they contributed to the peace in the arena and ultimately to the well being and safety of the athletes, the attendees, and arena employees.

This ban is not just a ban on attendance, it’s a ban on protecting others from violent physical assault, it’s a ban on peacekeeping, it’s a ban on doing the right thing. In the spirit of the bigger picture and to set a clear and proper example to the attendees that they should under no circumstances enter the Octagon, I accept the ban. But under the circumstances that once it is lifted, I get the seat of my choice for the next Conor McGregor card”.

Martin is from the country of Ireland but the 41 year old from Dublin has neen settled in US since he was 21.It’s interesting to see now whether the UFC lifts their ban on Martin or not.