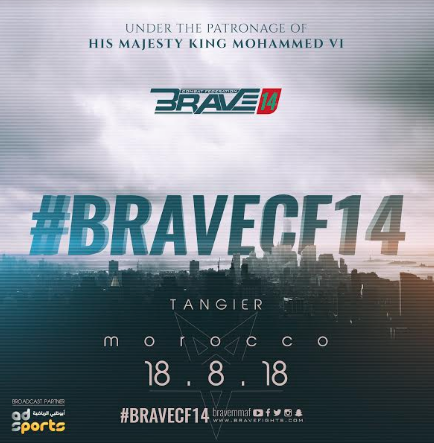 Bantamweight Felipe Efrain will return at Brave 14, set for Tangier, Morocco, on August 18th. The Brazilian fighter will take on Arnold Quero from France, and will look to get back to winning ways after tasting defeat for the first time at Brave 10 when he was knocked out in the first round by Frans Mlambo.
Before that, Efrain, who trains out of the world-famous Chute Boxe gym, had amassed a 2-0 Brave record with impressive KO wins over former UFC fighter Walel Watson and Nawras Abzakh. He was supposed to face Quero at Brave 9, but the Frenchman pulled out of the fight due to injury.
Meanwhile, “Silverback” made his Brave debut in Efrain’s home country, taking a hard-fought unanimous decision against Brazilian Caio Gregório at last April’s Brave 13 event.
Apart from the Efrain x Quero fight, Brave 14 had another fight confirmed in the last days, as Sidney Wheeler and Abdoul Abdouraguimov have agreed to face each other in a Welterweight battle for the ages.
Brave 14 has been confirmed to take place in Morocco in what promised to be a groundbreaking show. Tangier will welcome the first-ever global MMA promotion to Africa. In 2018 alone, Brave Combat Federation has visited four other countries, with Jordan, Brazil, Indonesia and Northern Ireland all hosting events.