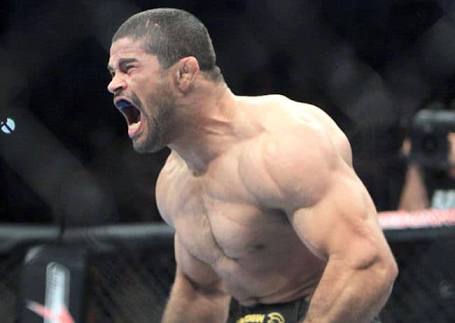 Fight Nights Global officially announced three fights for its upcoming card on in Moscow, Russia, on March 30, including the return of Former WSOF Welterweight Champion and UFC veteran Rousimar Palhares.

‘Toquinho’ will face unbeaten Aliaskhab Khizriev(11-0) from Russia who fights out of Eagles MMA a well renowned gym all over Russia.

Palhares (19-8-1) is coming off a draw with Shamil Amirov in Sept. 2017. The Brazilian originally lost the bout a controversial split decision, but the Russian MMA Federation overturned it to draw days later.Palhares is 1-0-1 in the Fight Nights Global Organisation.Palhares broke his 2 fight losing streak at Fight Nights Global 70 when he submitted his opponent Aleksei Ivanov via his trademark heelhook.Palhares has 10 wins in his career via heelhook.

Palhares’s release from the UFC:

Following his loss to Lombard, Palhares stated that he would be moving down one weight class to the welterweight division. He made his debut in the new division against Mike Pierce on October 9, 2013 at UFC Fight Night 29.He won the fight via heel hook submission just 31 seconds into the first round. This was the only successful submission throughout the event. However, Palhares was denied a Submission of the Night bonus because he continued cranking the heel hook after the referee stepped in, an act UFC deemed “unsportsmanlike conduct.” It was also noted that Pierce tapped a total of eight times to no response from Palhares.The next day, while conducting an interview with ESPN’s, UFC president announced that the UFC was releasing Palhares effective immediately due to not letting go of the submission.Hours later, UFC and Zuffa released a statement saying that Palhares was already in trouble for his failure to release his heel hook on Drwal in 2010 and his drug suspension in 2012, and his actions the night before were the last straw.

Khizriev (11-0) won six of his eleven fights by way of stoppage.

The Fight Nights Global card will also feature a pair of championship fights. In the main event, Abusupyan Alikhanov faces Roman Kopylov for the middleweight belt, while Alexander Matmuratov puts his featherweight title on the line against Movlid Khaibulaev.