Fights to make after UFC 209 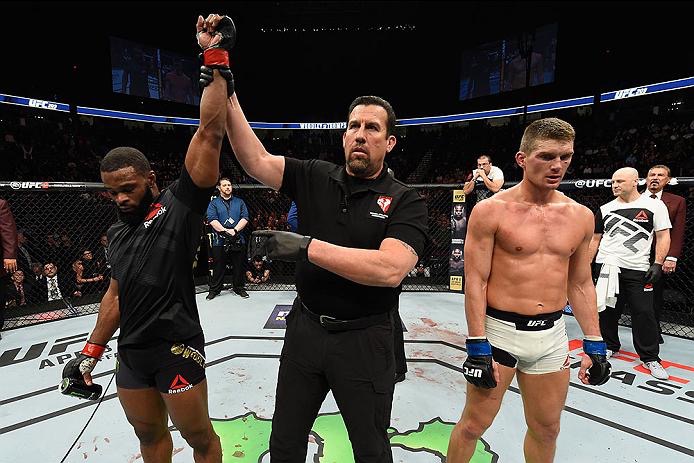 It’s safe to say that UFC 209 was an average PPV event. It had its ups and downs, but the negatives certainly outweighed the positives. The event was headlined by a Welterweight championship bout between “The Chosen One” and ‘Wonderboy’.

In the headliner, Thompson again failed to unseat Woodley and lost via a majority decision. On the other hand in the co-main event, much to the shock of everyone in attendance, David Teymur defeated Lando Vannata via unanimous decision.

So now that UFC 209 is in the books, it’s time to address the elephant in the room i.e. the matchmaking queries. UFC 209 has left us with many unanswered questions such as who should Woodley face next? Should Alistair Overeem get another title shot so soon?

We’ll try to answer all such questions in this article. So let’s take a look at all the matches that should be made after UFC 209.

Woodley certainly didn’t win any fans by his inert and sluggish performance at UFC 209. He is not a popular champion and doesn’t help a lot in selling merchandise. Thus, he isn’t a big draw unlike some of the other champions such as Conor McGregor and Michael Bisping. Hence, “The Chosen One” is surely in no position to demand big-money fights and won’t be headlining another PPV anytime soon. Thus, deciding Woodley’s next opponent is an absolute no-brainer. He should face Demian Maia in his next fight.

Maia is currently scheduled to face Jorge Masvidal. However, the Brazilian is on a six fight win streak and has already done enough to secure a title shot for himself. Thus, the UFC can and more importantly, should scrap off the fight between Maia and Masvidal. The matchmakers can surely find another opponent for “Gamebred” and should book Maia to fight for the title against the champion.

David Teymur entered the octagon as a heavy underdog against Lando Vannata. However, he shocked a lot of people with his phenomenal striking and impressive performance. In a slobber-knocker of a fight, he consistently out-struck Vannata, who seemed to have no answers for his marvelous striking.

Teymur has currently only faced unranked opponents inside the octagon. With his victory over top prospect Vannata, he should face a ranked opponent in his next fight. Thus, the thirteenth ranked Dunham should be the ideal next opponent for him.

Dunham was expected to face Abel Trujillo at UFC Fight Night 104. Though, he had to pull out due to an injury. Thus, as soon as he regains full fitness he should face the upcoming Swede.

Dan Kelly is proving that if someone wants to follow their passion then age is certainly no bar. He is currently riding high on a four fight win streak and should continue to take on well-known opponents like Rashad Evans. Thus, a face-off with Johnny Hendricks makes the most sense. “Big Rig” recently made his middleweight debut against Hector Lombard and needs another opponent.

Hence, Joe Silva and other UFC matchmakers should seriously consider booking a fight between Kelly and Hendricks.

Cynthia Calvillo made a dream debut inside the octagon by choking out Amanda Cooper. She is an inexperienced fighter with only four professional MMA fights under her belt. She trains at Team Alpha Male which is the best gym for fighters of lighter weight classes. Thus, she should face Justine Kish in her next bout.

Kish last fought and defeated Ashley Yoder at UFC Fight Night 102. Kish is also an inexperienced fighter and only has six pro-MMA fights under her belt. Thus, the inexperience of both the fighters makes them a perfect opponent for each other

Almost every other top 10 fighter in the division is already booked to face someone else. Thus, it leaves the oft-injured American and the Dutchman without opponents. Thus, they should face each other. Whoever wins that fight will surely find himself in title contention.

”The Reem” vs. Velasquez is every MMA fan’s dream match. They are two of the top heavyweights the octagon has seen in the past decade. What makes their clash even more fascinating is the fact that even though they have been at the top of the 265 pounds division, they still haven’t ever faced each other.

Out of all the fighters on this list, ‘Wonderboy’ has the most number of opponents available for potential match-ups. He can easily face fighters like Carlos Condit, Donald Cerrone, Neil Magny in his next fight. However, the best opponent for a potential fight would be the former champion Robbie Lawler.

Stylistically as well a fight between an aggresive brawler like ‘Ruthless’ against a technically adept fighter like ‘Wonderboy’ would be a treat for the fans. Such a fight can also help Thompson to cement himself as one of the most exciting fighters in the division after a monotonous bout at UFC 209.

UFC matchmakers should immediately book this fight. Afterall, everyone would love to watch ‘Ruthless’ taking on ‘Wonderboy’.

The Lando Vannata hype train got derailed and demolished at UFC 209. In a thrilling three round battle, Vannata was defeated by David Teymur with relative ease. Vannata had looked phenomenal against top contender Tony Ferguson. However, he was out-struck and outclassed by the Swede.

He is currently on a two fight losing streak and has lost all his momentum. Thus, he should face an unranked opponent in his next fight.

Stevie Ray is an unranked fighter who previously defeated Ross Pearson. His next opponent is currently tentative. Hence, it makes him the perfect opponent for ‘Groovy’ to take on in his next fight.

Next opponent: No one

‘Suga’ Evans is an MMA and UFC legend. From his sensational knockout of Chuck Liddell to his longstanding rivalry with Quinton Jackson, he has given the sport a lot of memorable moments. However, nothing lasts forever and Evans’ prime is certainly long gone. He is currently ruining his legacy and should decide to call it a day.

Cooper lost her fight at UFC 209 in an embarrassing way. She was quickly choked out by Calvillo with relative ease. She is 2-3 in her pro-MMA career and should fight an unranked opponent in her next fight. Thus, a face-off against a fighter like Ansaroff who herself has an MMA record of 7-5 makes sense.

Mark Hunt is getting old and isn’t happy with the way the UFC have treated him. Thus, it won’t be a surprise if he decides to hang his boots. However, if he decides to continue with his octagon career then he should face ‘Hapa’ Browne. Both Hunt and Browne have had a series of consecutive losses inside the octagon. They are both desperate for a victory. Thus, pitting both of them against each other makes sense as they are still top 10 heavyweights.

Comment and let us know your views about this feature.

Till the next article is published, keep training and never give up.