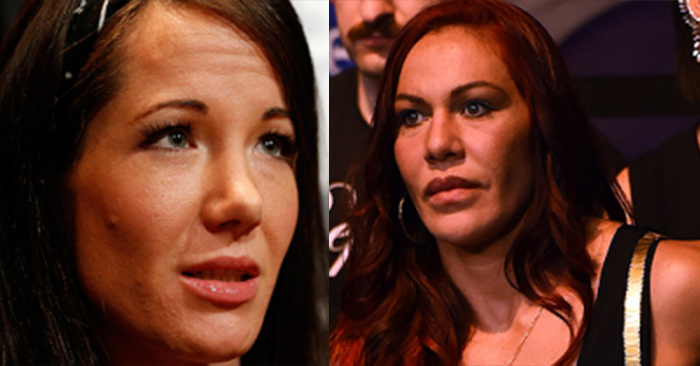 In the world of Mixed Martial Arts, there have been instances when the bad blood inside the cage spilled out of it. Considering the fact that, unlike professional wrestling, MMA involves two fighters who try to legitimately knock each other out, personal animosity isn’t unheard of. While the whole point of martial arts is to know yourself better, and to learn about respecting your opponents, MMA fighters, more often than not try to project their hatred onto others.

The metrics that are considered while judging a fighter and a promotion have drastically changed over the years. No longer do the fans talk about the skill set, or the superior technique of the fighters. Instead, people focus on who the better ‘draw’ is, or on the number of Pay – Per – View buys/TV ratings of an event.

‘Stockton, motherf***er’ – two words every UFC fan, at least by now, is familiar with. The Diaz brothers have been the ‘bad boys’ of MMA for nearly a decade. Whether it was during Strikeforce, or the intense rivalry between GSP – Nick Diaz, or the more recent Conor McGregor – Nate Diaz feud — the Diaz brothers are two of the most intense fighters in the sport of MMA.

Khabib Nurmagomedov doesn’t mince his words either. The Dagestani fighter is one of the top lightweights in the world today, and has proved to be one of the toughest fighters around. So when Nate and Khabib crossed paths during WSOF 22 in Las Vegas, things quickly escalated between the two groups.

Soon enough, Nate Diaz’s Skrap Pack got into a huge brawl with Khabib and his crew. The entire ordeal was captured on camera, as men were seen hurling each other to the ground. Security personnel quickly intervened to stop the melee, but it once again highlighted the ‘anytime, anywhere’ motto of the Diaz brothers, as well as the willingness of the Russians to ‘throw down’ at a moment’s notice.

Sonnen and Wanderlei are set to battle each other on the upcoming Bellator NYC card. ‘The Axe Murderer’ has never been a fan of ‘The Bad Guy’, and their fight was supposed to take place couple of years ago in the UFC. During TUF 3 Brazil season, Sonnen and Wanderlei served as coaches, and were seen threatening each other on multiple occasions. However, things finally escalated when Wanderlei got too close to Chael.

During the weigh – ins for a fight, Wanderlei loomed too close to Sonnen, who proceeded to shove him. This resulted in both men getting into a scuffle, as Silva threw a punch, but Sonnen ducked and went for a takedown. The contestants then had to step in and separate the two legends, but not before one of Wanderlei’s fighters, Andre Amade punched Sonnen during the tussle.

UFC has a big summer ahead, with some excellent fights and stacked cards already announced. Two weeks ago, UFC organised the UFC Summer Kickoff Press Conference, with all the top fighters assembled on the stage. This usually leads to heated confrontations, and while the attention of the fans was certainly directed towards Jon Jones and Daniel Cormier, it was Michael Chiesa and Kevin Lee that stole the spotlight.

Both men started arguing, with Kevin mentioning Chiesa’s mother, and that she got the tickets for the fight. This didn’t sit well with Chiesa, who took things personally. Both men then started approaching each other, as Lee threw a punch, which landed on Chiesa. The security acted quickly and created separation between the two fighters, as UFC threw both the fighters out of the presser. While Lee’s punch did land, the situation was quickly taken care of before the whole thing got out of hand.

Cris Cyborg isn’t new to being bullied. The top pound for pound female fighter on the planet has been on the receiving end of some unflattering remarks in the past. From Ronda Rousey to Dana White, a lot of people took liberty in knocking Cris, either for her history with PED’s, or something as petty as her looks. UFC strawweight fighter Angela Magana soon found herself on Cyborg’s bad side, when she decided to have fun at Cyborg’s expense.

However, Magana wouldn’t have thought she’d actually bear the brunt of Cyborg’s animosity. Most of the UFC fighters are currently in Las Vegas for the ‘UFC Retreat’, but Magana wouldn’t have enjoyed what transpired just yesterday. According to multiple reports, Cyborg confronted Magana about the subject of her tweets, and proceeded to punch Magana! While Angela wasn’t knocked out, there have been reports about Cyborg knocking out Magana’s tooth.

However, Angela has since taken to Instagram to show the world that her teeth were still intact. Angela has also decided to press charges against Cris, and we will have to wait and see how this story unfolds.

Few would be surprised with our number one pick. If there ever were two fighters that represented opposing ideals and beliefs, it has to be Daniel Cormier and Jon Jones. DC cannot stand what Jon embodies, and Jon Jones cannot find an iota of sympathy for Cormier. Both men hate each other’s guts, which stemmed from their lack of respect for each other.

Both the fighters were present to promote their fight at UFC 178, with Dave Sholler taking Dana White’s place. When both men squared off, Jones got too close to DC, and DC retaliated by grabbing Jon’s throat and pushing him away. The champion wasn’t pleased to say the least, as he thwarted Dave, and proceeded to punch DC. The fight went to the ground, as Jon Jones got some more shots in at a grounded Cormier.

Both men eventually faced each other at UFC 182, with Jon Jones winning the fight. DC and Jon are scheduled to face each other again at UFC 214 – this time with Daniel Cormier walking into the fight as the champion. 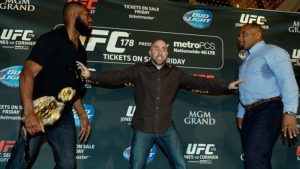