Floyd Mayweather gets his 50th win as he stops a gassed McGregor in the 10th Round. 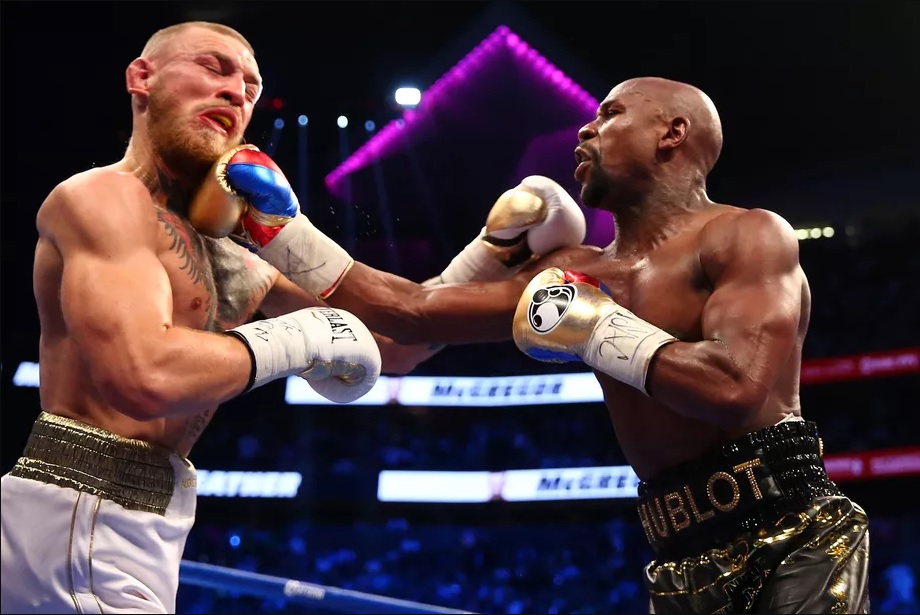 Conor looks intensely focused as he makes his way to the ring, while Mayweather pulls off an outfit akin to Kylo Ren of Star Wars. Somehow that flashy arrogance is missing from Connor which he usually displays during his UFC fights. He is anxious and for the first time displays signs of nervousness, but Floyd is cool as ever re-iterating the ring is his yard. They face off and surprisingly there is no trash talk. Connor the taller guy looks dead focused but Floyd doesn’t care a bit.

The biggest fight of the millennium is underway. Round 1 begins with Conor charging forward making Mayweather backdown towards the ropes. McGregor throws to the body, lands a left to Mayweather’s head. Floyd comes back with a right but misses the target and in turn east a quick left. Mayweather throws a missing right to the head and the goes straight to the body. There is some action as they both exchange punches to the body. Connor lands an upper cut as the round is coming to an end. Round 1 goes to McGregor.

Again, Conor backs Mayweather into corner and lands few punches but evasive Floyd dodges them. Mayweather lands a straight right. McGregor uses his jab frequently but unable to land. McGregor does his stance switching and lands quick lefts. Mayweather responds back with a right to the head. Conor gets inside and throws few short quick punches that we saw in the sparring with Paulie. McGregor ties Mayweather up, lands punches to the back of the head, which referee warns him about. Connor is conserving his energy and playing the smart game. Round 2 goes to Connor.

Conor knows he needs to back Mayweather to the corner and which is what he does and backs the legend. Mayweather comes back and gets inside but Conor taps with punches to the head. Mayweather shoots a straight right to the body and then they clinch. Looks like we’ll see more of such clinches and tie-ups in the rounds going forward. McGregor lands on the body with a left and then to the head a few times. Conor keeps himself active with the jabs and gets inside. Mayweather ducks but gets hit with a short punch to the top of the head. Round 3 goes to Connor.

Conor follows the same strategy as he continues to put pressure on Mayweather who backs into the ropes the moment the round starts. Conor lands beautiful body shots, mostly blocked by Mayweather. TBE resorts to his usual ducking down and going low, turning and covering up to neutralize Conor and frustrate him. The referee breaks them up and Mayweather lands a right to the face, but Conor’s chin is hard to crack and he absorbs it easily. Its Mayweather now, digging to the body of the Irishman. A beautiful left uppercut sending signals to Mayweather that the fight has begun. Round 4 goes to Conor.

Mayweather is getting warmed up now and pushes forward going in for the body shots. A strong right cross to the body from Mayweather, backing Conor towards the ropes. Another one lands. He has found his range as he lands notable shots. Conor responds with short punches to the gloves. Mayweather unleashes a quick right cross and left hook combination stunning Conor. Signs of Conor slowing down have begun to show. Round 5 goes to Mayweather.

Conor continues to open the round with his jab and quick combinations. Conor gets behind again and referee warns him again. Mayweather is now showing signs of overpowering Conor who backs off to the double jab. Mayweather’s right to the body, left to the head and then to the body keep Conor on the toes. Conor comes back with a left but misses the mark and so does Mayweather who wanted to connect with a right of his own. Round 6 goes to Mayweather

This time its Mayweather who charges towards Conor. Conor senses and lands a right to the face. They both tie up and referee steps in to break them up. Conor’s gas tank is being depleted with every punch that he is throwing. He constantly tries to tie up Mayweather to get a breather. He must stay in the fight and throws a left but misses again. The round is coming to an end and Conor ties up again and lands from behind. The referee has seen enough so he ignores this on. Round 7 goes to Mayweather.

Conor is now entering the deep waters of the game. He is breathing heavily while Mayweather keeps the composure and stalks Conor to land some big shots. Mayweather lands a right followed by another one and another one. Conor is back peddling as he keeps taking shots. Conor is on auto pilot as he lands a jab. They both get close in and land few punches. Its Mayweather’s left uppercut and an overhand right that stun Conor. Mayweather unleashes lead right hand and left to end the round.

Looks like Conor got his second wind back as he initiates the round but lands his punch too low. Mayweather signals but the referee didn’t notice it. They tie up again and as they separate Conor lands a quick shot. Mayweather looks pissed and lands his own right punches to the head. He is on the offensive and wants to make a statement. Mayweather lands a right left combination to Conor’s head. Mayweather wants to get his 27th win via KO and lands 1-2’s and uppercut. Conor is in deep trouble and this fight can end anytime, but time is on Conor’s side as the round comes to an end. Round 9 goes to Mayweather

Conor senses urgency with only three more rounds to go. He takes the centre position and moves in to tie up Mayweather who lands a solid hard left. Conor is rocked. Another right to the jaw of the UFC lightweight champion, whose legs are now completely given up. Mayweather sees his opportunity and jumps in to finish. The ropes keep Conor from falling but the referee sees it’s enough and done for Conor. The fight is stopped at 1:05 secs. Mayweather wins via TKO

Many critics claimed Conor would not land a single punch, but instead he landed 111 significant shots many in the opening rounds. He took Mayweather to 10 rounds, but fell short mainly due to his cardio. Conor did what no other MMA fighter could have done and displayed signs of brilliance as he landed some neat shots. Regardless, this has got to be the best Mayweather fight in a very long period of time and he proved why he is the best ever.

Dana White doesn’t want McGregor to box again. The UFC President said “I would rather he did not box again. This isn’t what he does. He’s a mixed martial artist, where he goes in and he fights and he uses all his weapons. And tonight, he was only allowed to use his hands. I think he did great tonight. I don’t think there’s anything else left to prove. I would rather he fight in mixed martial arts.”

Floyd Mayweather Jr. revealed he didn’t spar for a month ahead of his fight against Conor McGregor. “We had a cool training camp. I didn’t box for the last month, I didn’t do no sparring. There’s no excuses, he came out here and fought a hell of a fight. It was an injury, of course. Not an injury like that, but I wanted my hands to be a hundred-percent for the fight,” he replied. “You know, I didn’t want… my hands are real brittle. Everybody knows that. I wanted my hands to be real solid when I came out here. So, when I’m shooting hard shots, I’m able to break the guy down. Whereas if I were to box with a serious hand injury I wouldn’t be able to punch as hard.”

Conor McGregor walked into the post-fight conference with a bottle and a glass of Irish Whisky. He’s already got his hands full for his next business venture with ‘Notorious Irish whiskey – coming soon. “I’m going to take over the Irish whiskey market – and this is delicious!” When asked what’s next? Conor is not sure about it but will continue to learn and study the game of mixed martial arts.