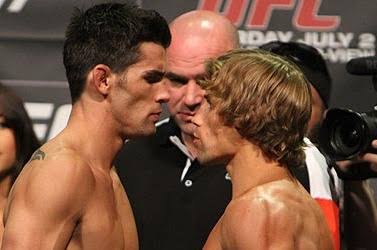 The UFC bantamweight division is stacked from from top to bottom. However according to former title challenger and Hall of Famer Urijah Faber, there’s one man the fans may be overlooking. The longest reigning bantamweight king Dominick ‘The Dominator’ Cruz.

The division has a unique blend of young contenders and grizzled veterans. However amongst them, one name clearly stands out of #3 ranked Petr Yan. Yan has won all six of his fights inside the octagon and is knocking on the door for a title shot. 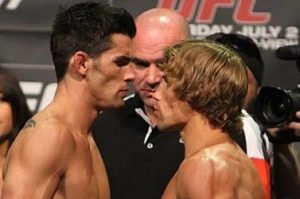 Faber however, who has shared the octagon with both Yan and Cruz, wants a title eliminator between the two. Faber believes Cruz is a bad matchup for Yan and will handle him his first loss inside the octagon.

“I think Dominick Cruz would be a nightmare matchup for Yan. Maybe have Dominick come out and fight Yan and the winner of that (gets the title shot). Everyone’s sleeping on Dominick Cruz,” Faber said.

Cruz has been directly campaigning to fight for the title. However the bantamweight division with young contenders like Petr Yan and Cory Sandhagen making the right noices. Top contender Aljamain Sterling on a winning streak and veterans like Jose Aldo, Frankie Edgar and Cody Garbrandt looking to start their respective campaigns. It does seem a bit difficult for Cruz to frogleep the above mentioned.

Previous articleUFC News: Ali Abdelaziz sends another typically strong worded message to Conor McGregor
Next articleArjan Bhullar could be fighting for the ONE Heavyweight Championship in May 2020!