Former rivals Suleiman and Fakhreddine discuss friendship ahead of Brave 10 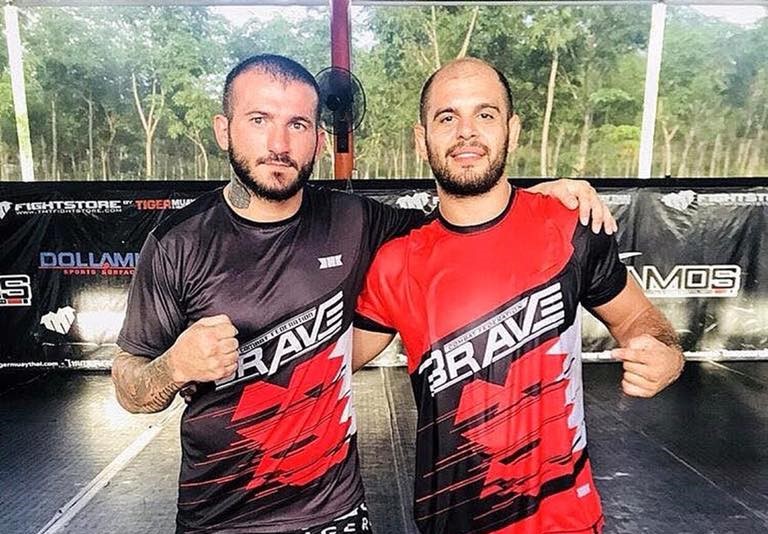 Mohammad Fakhreddine and Tarek Suleiman have forged a strong friendship after they fought back in 2013 and have discussed their “brotherhood” ahead of Brave 10: The Kingdom Rises when both men will compete, this time in different weight classes. Fakhreddine takes on Tahar Hadbi in a rematch at Welterweight, while Suleiman will make his Brave Combat Federation debut at Middleweight, against Will Fleury.
Lebanon’s Fakhreddine and Syria’s Suleiman faced each other in both men’s second professional MMA fight. After “The Latest” beat Tarek Suleiman by KO, they became friends and teammates, pushing each other to the limit ahead of their possible career-changing bouts at Brave 10.
“Mohammad Fakherddine is more than a brother to me. We support each other in training and outside training. We understand each other perfectly when I corner him or he corners me. We do spend a lot of time together and we kind of think almost the same things about the fight game”, says Suleiman, who thinks their skill sets complement each other.
“I’m more of a grappler and he is more like a striker so we are completing each other in a way. It’s true we faced each other before, but it was over at that cage and, you know, best friends are made from being enemies first”.
Fakhreddine also feels they complement each other in training and says having Suleiman by his side has helped him turn into a Welterweight contender for Brave.
“I’m always together with my brother Tarek. We are always training and pushing each other. He has been very important in my career and now he has a chance to prove himself at Brave. I can’t wait to see him in action”, says the Lebanese phenom.
Brave 10: The Kingdom Rises marks the promotion’s first show in Jordan, home to some of Brave’s most decorated fighters, and the seventh country to host a Brave Combat Federation event, after Bahrain, Brazil, the United Arab Emirates, India, Kazakhstan, and Mexico.
Brave 10 Full Fight Card:
Featherweight title bout: Jakub Kowalewicz (Poland) vs Elias “Smile” Boudegzdame (Algeria)
Welterweight bout: Jarrah Al Selawe (Jordan) vs David Bear (France)
Lightweight bout: Charlie Leary (UK) vs “The Pride of Palestine” Abdul Kareem Al Selwady (Jordan)
Welterweight bout: Mohammad “The Latest” Fakhreddine (Lebanon) vs Tahar “Fast Hands” Hadbi (France)
Welterweight bout: Pawel Kielek (Poland) vs Tyler Hill (USA)
Bantamweight bout: Felipe Efrain (Brazil) vs Frans Mlambo (Ireland)
Featherweight bout: Dylan “The Nuke” Tuke (Ireland) vs Sodiq “Super” Yusuff (USA)
Bantamweight bout: Jalal Al Daaja (Jordan) vs Crisanto Pitpitunge (Philippines)
Catchweight bout (74kg): Mohammad “The Killer” Ghorabi (Lebanon) vs Gadzhimusa “Deadshot” Gaziev (Russia)
Middleweight bout: Tarek Suleiman (Syria) vs Will Fleury (Ireland)
Bantamweight bout: Nawras “The Honey Badger” Abzakh (Jordan) vs Abdul Hussein (Finland)
Middleweight bout: Chad “Superman” Hanekom (South Africa) vs Ikram Aliskerov (Russia)