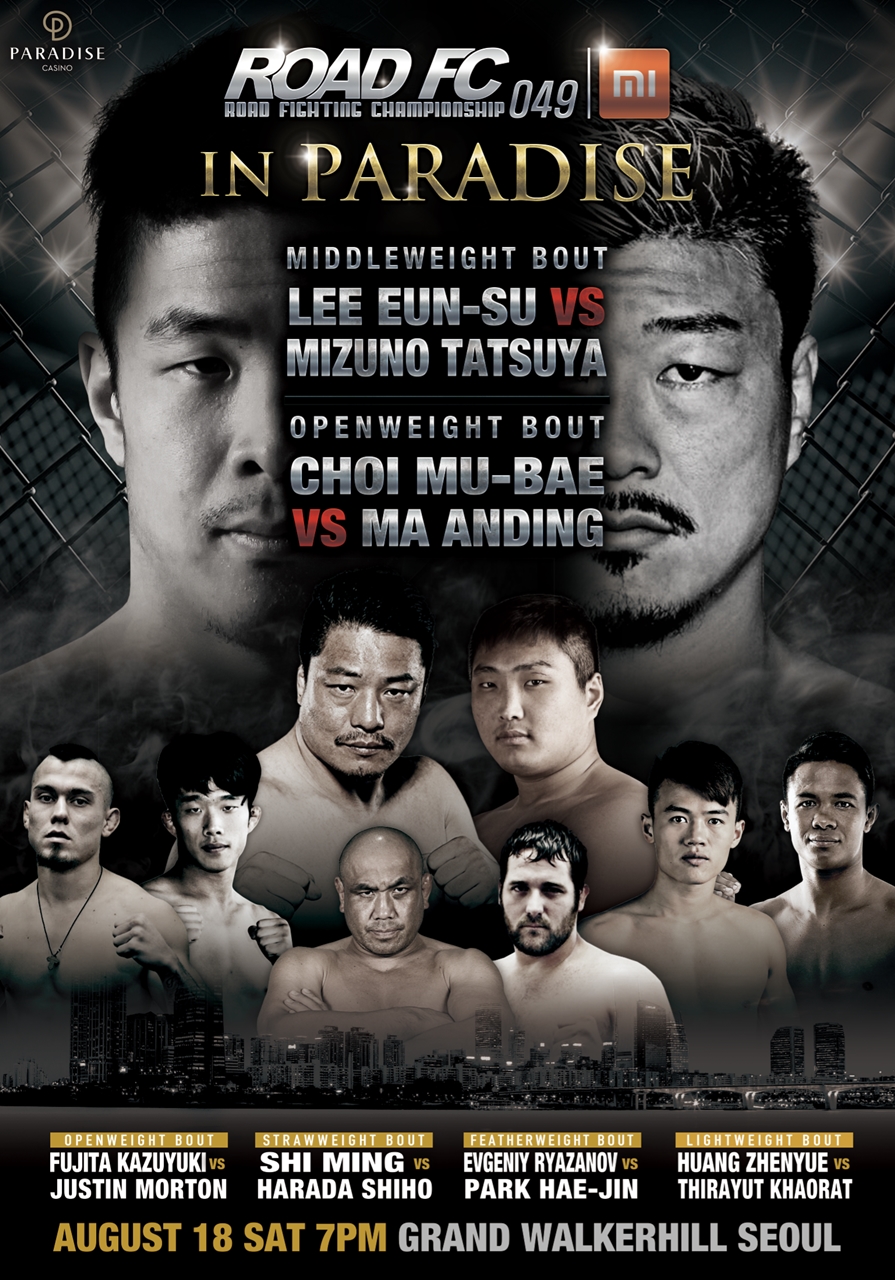 Former ROAD FC Middleweight Champion Lee Eun-Su (16-5-0-1, Empower / HIM Sports) finally makes his return to the cage after a two year hiatus due to injury. Lee started his career in 2003 as one of the first generation of Korean MMA fighters. He racked up a record of 10-1 in Spirit MC in just one year which gave him opportunities in PRIDE, K-1, M-1, and DEEP. Lee became the ROAD FC Middleweight Champion in 2012 by defeating Shungo Oyama with a first round TKO. He suffered a serious knee injury and did not fight again until 2016. Lee is known for his aggressive striking.

Mizuno Tatsuya (18-12-1, independent) is the current DEEP Middleweight Champion. He won the title with a submission victory over Taisuke Okuno at the beginning of the year. Mizuno started his career as a judoka in 2003 in Pancrase. He then fought in DREAM, M-1, K-1, and ONE in multiple divisions against Cro Cop, Ilir Latifi, Melvin Manhoef, Gegard Mousasi, Sergei Kharitonov and Renato Sobral. Mizuno is known for his judo, tenacity, and heart.

Lee Eun-Su versus Mizuno Tatsuya will be a thrilling champion versus champion, style versus style match!

Choi Mu-Bae (12-7, Choi Mu-Bae Gym) is a decorated wrestler and one of the very first Korean mixed martial artists. In 2004 he began his career in the historic PRIDE where he fought five times. Choi has also seen action in K-1, Sengoku and Pancrase, and made his MMA comeback in ROAD FC in 2015. With wins over Soa Palelei, Gary Goodridge, and Dave Herman, Choi has always proven himself to be one of the toughest guys on the planet.

Fujita Kazuyuki versus Justin Morton will be another openweight bout that features wizened legend versus surging local champ.

Fujita Kazuyuki (16-14, Team Fujita) is a living legend who counts wins over Ken Shamrock and Yoshihiro Takayama in PRIDE. He faced the trio of all-time elites: Cro Cop, Fedor, and Wanderlei Silva. At 48 years young, he’s still showing no signs of slowing down. He retired a much younger fighter Kong Handong at ROAD FC 047.

Justin Morton (10-3, Tenkaichi Dojo) is an American who has been training and fighting in Okinawa, Japan since 2010. He has beaten Minowaman, and two of his only three losses were to Kawaguchi Yusuke and Inoue Shunsuke. Morton is very much a striker, but he likes to do the work on the ground.

Shi Ming versus Harada Shiho is a match in the growing women’s strawweight division.

Shi Ming (1-2, Chinwoomen) and Harada Shiho (0-1, Mouri Dojo) both come from kickboxing backgrounds, but Shi was able to take out her first opponent by submission.

Evgeniy Ryazanov versus Park Hae-Jin is a bantamweight match between two very different backgrounds and styles.

Evgeniy Ryazanov (19-13, MFP) is a warhorse in Russia fighting on average 5 to 6 times a year. He is a technical sniper and acrobatic kicker who can put pressure on throughout a full three rounds. Ryazanov also has submission skills.

Park Hae-Jin (6-0, Kingdom) is a hot prospect with an undefeated record in his 3 years of MMA. He is a strong grappler who has won many tournaments and came to his pro MMA career through ROAD FC’s amateur leagues. Park is able to use his jiu jitsu skills in MMA very well.

Zhenyue Huang (3-4, Chinwoomen) is a 20-year old who represents the next generation of China’s MMA. In just 2 years of MMA, he’s been willing to step in the cage with anyone, anywhere, and he learns from each experience. Huang is tall and rangy, and uses a thrilling assortment of kicks to both damage his opponents and keep them at bay.

Thirayut Khaorat (3-3, Tiger Muay Thai) is a Southern, Rajadamnern, and Omnoi Stadium Muay Thai Champion with over 270 wins to his name. He’s the first fighter from Thailand to be signed with ROAD FC. Khaorat is only just beginning to make his mark in MMA, willing to put himself in uncomfortable situations to test himself.