Former UFC lightweight champion Anthony Pettis has announced on Twitter that she has parted ways with UFC after fighting in the organisation for nearly a decade.

The 33-year old last fought against Alex Morono at UFC Vegas 17 which was the final fight on his UFC contract. He has been with the promotion since 2011 when UFC decided to buy WEF, where Anthony Pettis was initially fighting. 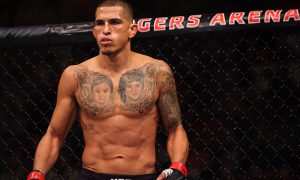 Anthony Pettis took to social media to make the announcement where he thanked Dana White and the UFC staff for supporting him throughout his fighting career.

After 12 years I’ve decided to part ways with the UFC to explore free agency.

“Almost 12 years with this company and so many amazing memories,” Pettis wrote. “From winning my first world title at 23 years old to becoming the UFC world champion at 26 in my hometown. From being on MTV to the cover of the Wheaties box, I am forever grateful for everything I have experienced and accomplished with this company!!!

“Dana – thank you for everything you have done for me. I was just a kid from the south side of Milwaukee, Wisconsin with a big dream. You helped me turn that dream into a reality. THANK YOU!!!

“Lorenzo and Frank Fertitta, Reed Harris, Sean Shelby, Dave Sholler, and Burt Watson, you have helped me and impacted my life and career in countless ways. I will be forever thankful. Everyone at the PI, you helped take my game to the next level! Everyone that works behind the scenes, I am so grateful for your tireless work, especially on the road, you have no idea how much you are appreciated. Thank YOU!!!

“Last and most importantly the UFC fans … thank you!!! You gave me energy in every fight. I hope I have been able to you that ANYTHING is possible. I am excited about my future in this sport. I promise I am not done.

“From the bottom of my heart, thank you all,

Where is Anthony Pettis headed to?

Anthony Pettis will most likely join Bellator where his younger brother Sergio Pettis departed to in 2019. He held the UFC lightweight title from 2013 to 2015 and he was also the WEF lightweight champion in 2010. He is departing from the organisation with a professional record of 10-9.