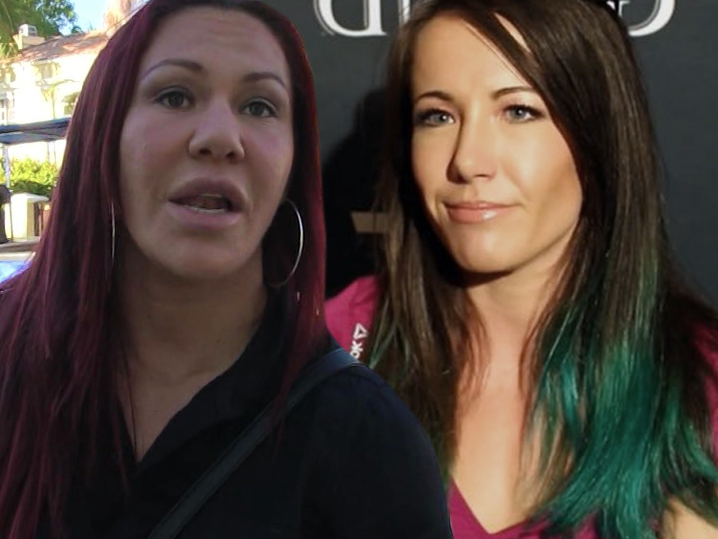 This past weekend, UFC brought all the fighters on their roster together for an Athlete Retreat. As an organisation, it made all the sense in the world to give back to the fighters. Amidst all the dissent and being on the edge regarding various issues, the fighters got the chance to relax, and have a mini vacation of sorts.

Or so the UFC officials believed.

Having all the fighters under one roof can lead to altercations, and things could get very ugly in an instant. In the recent past, the fighters have learnt the importance of being ‘entertaining’ on social media, and this has led to them calling others out.

For some, it is just a part of the fight business. For others however, it is perceived as a lack of respect. So gathering all the fighters, some of who have bad blood with the others might not sound like a great idea. Whatever could go wrong at the Athlete Retreat did go wrong; we take a look at four shocking incidents which happened during the Athlete Retreat.

The biggest talking point from the Athlete Retreat was the confrontation between Cris Cyborg and Angela Magana. For weeks, Magana taunted Cyborg on social media, drawing parallels between Cyborg and Jigsaw from the Saw franchise. Moreover, Magana attacked Cyborg, saying she was on PED’s, and brought up her past where she was flagged for taking anabolic steroids.

This obviously did not sit well with Cris, who fired back time and again on social media, asking Magana to tell it to her face. Unfortunately, Magana found herself standing a couple of feet away from Cyborg, as Cris finally had the chance to confront the strawweight. Words were exchanged, and Cyborg proceeded to punch Magana, as the UFC officials called the cops.

Magana then pressed battery charges against Cris, who will have to appear in court. This could also affect Cyborg’s chances of fighting inside the Octagon anytime soon, and she may even be looking at serving time, depending on how the hearing goes!

Jeremy Stephens shoved to the ground by Mike Perry 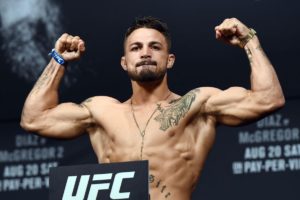 “I pushed Jeremy Stephens to the ground. We were at the Snoop Dogg concert. Cris ‘Cyborg’ had punched that one girl in the face on the second day. On the first night, they got between a couple of fighters, but they didn’t even touch each other. But, then Jeremy Stephens tried to dance up on my girl, and he knew it was my girl. It was at the end of the night.”

“Snoop had already come out, and I had been killing it, dancing with my girl all night. Jeremy Stephens walks up on her, and mid hip-thrust, as he was about to maybe make contact with her body, I pushed that mother fucker hard as I could, double-hand to his chest, and he fell on the ground. He was mad as hell, but he didn’t do shit. He was trying to be a dick, but he’s 145 pounds, he doesn’t want these problems. Who the fuck is that guy, bro?” 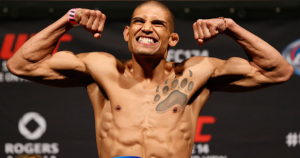 Ever since the Reebok deal came into effect, the UFC fighters have expressed their disapproval. Not only did they lose out on sponsorship money, but the Reebok pay structure meant that most of the fighters weren’t making much, if anything from the deal. While there were huffs and puffs before, Kajan Johnson finally had enough, and confronted the Reebok and Anheuser Busch officials in the middle of the session.

The whole incident was caught on camera by Alan Jouban, as Johnson asked the representatives how they could sleep at night, knowing that they were taking ‘food off their plates’. Johnson was immediately escorted out of the room, but later sat down with the UFC officials, who wanted the fighters to air their grievances. 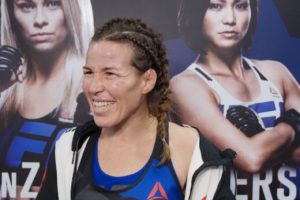 For the past couple of years, numerous attempts have been made to form a fighter union/association. While the likes of MMA Athletes Association and the PFA fizzled out before they could do any good, the MMA Fighters Association is making inroads, albeit at snail’s pace. One of the biggest advocates for forming an association or union for the fighters, Leslie Smith couldn’t resist herself from asking Kobe Bryant about his thoughts on athletes needing to have someone represent them during the negotiations.

Kobe was forthright in his answer, saying that he, along with the other basketball players benefitted immensely from forming a player’s association. The fighters who were sitting near Leslie immediately cheered and applauded her guts, to bring up the issue while the others remained tightlipped. Here is what Kobe said about the need for having an association.

“It is extremely important. Even us as players, where we have our union meetings and things of that nature, we’re normally at each other’s throats competing against each other. But we understand completely that a rising tide raises all boats.

When you guys have this unity and you guys are operating together on the same page together, it does nothing but simply fortify the sport, make the sport better. Not just for present, but for future generations that are coming. So it’s extremely important.”